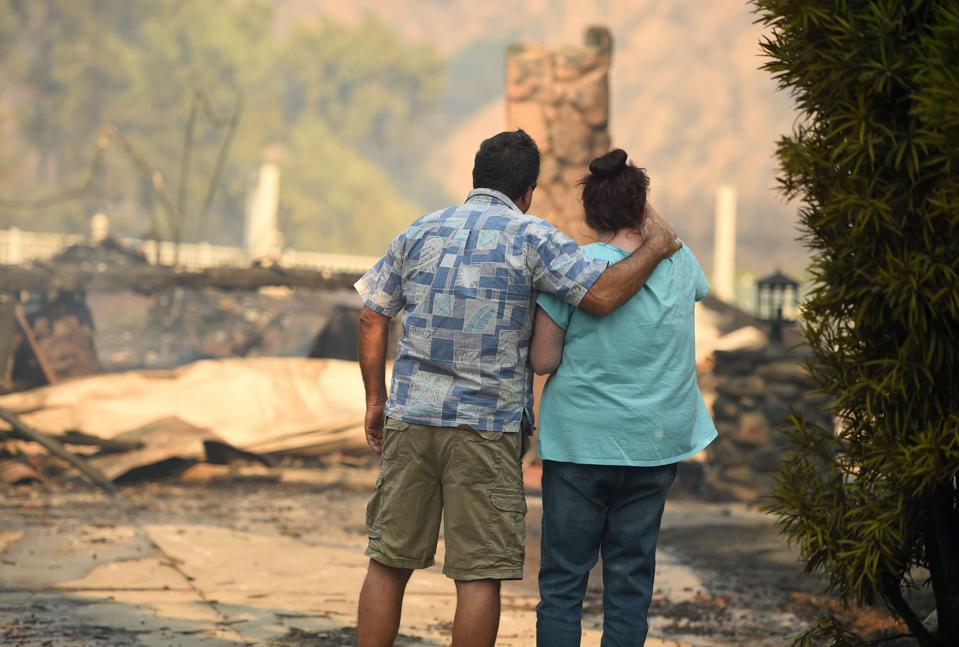 Four counties in California head the list of places at risk of losing the most housing value due to destruction from wildfires, according to a new report from Redfin. Los Angeles County, home to more than $1.2 trillion worth of homes and one of the regions in the nation most susceptible to wildfires, stands to lose the most housing value. Next are Orange County ($502.6 billion in total housing value), Santa Clara County ($488.5 billion) and San Diego County ($417.6 billion).

Although the areas most at risk for wildfires — those that experienced more than 20 wildfires from 1960 through 2016 — account for just 4 percent of all U.S. households, those homes account for 8.1 percent of total U.S. housing value, or $2 trillion worth of housing, the Redfin analysis found.

Massive wildfires have ravaged California for years, but a recent uptick in the frequency and intensity of the fires, along with exorbitant insurance premiums and mandatory electricity shutdowns, are causing residents to move away from fire-prone areas and buyers to question purchasing homes in dangerous parts of the state.

Lindsay Katz, a Redfin agent in Los Angeles, said this year’s wildfires are affecting local residents more than they have in the past.

“Southern California is such a desirable area that residents generally put up with the negatives, like several weeks of fire and smoke each year and paying high premiums for home insurance. But I think this year is a turning point,” said Katz. “People who live here and people buying homes here are getting fed up because not only are the wildfires particularly bad right now, but they’ve been relentless over the last few years. In the past, residents would get a few years off between fires and they would kind of forget about them, but we haven’t even recovered from the Woolsey Fire that hit Malibu last November, and people are evacuating and losing their homes again.”

Because of the threat of wildfires, Katz said a friend decided to move to Denver. “I also worked with a couple a few months ago who sold their home in Los Angeles and moved to Gilbert, Arizona,” she said. “Once you’re impacted multiple times and you know people who have lost their homes, the threat feels more real.”

Redfin agents in Sacramento and El Dorado counties in Northern California are also reporting a major shift in housing markets in fire-prone areas, particularly those where premiums for fire insurance are rising and where Pacific Gas & Electric has been cutting power in an effort to prevent wildfires.

Debbie Olson, a Redfin agent in Sacramento, said buyers and sellers in the area are concerned about the effect of wildfires on home prices and total housing costs.

“Earlier this year, I worked with a couple who was selling their home in Auburn (located northeast of Sacramento) and looking to buy in the same neighborhood, but they were priced out because insurance premiums have risen so much due to wildfires,” Olson said. “They were quoted around $9,000 per year just for fire insurance. Even though the seller offered to pay half the cost for the first two years, my clients ultimately decided to buy a home in a neighborhood that’s less fire-prone to avoid paying such a high premium.”

Ellie Ruiz Hitchcock, a Redfin agent in El Dorado County, located between Sacramento and Lake Tahoe, said the housing market is adapting to the wildfires and mandated rolling blackouts this fall.

As buyers become more nervous about purchasing homes in fire-prone neighborhoods, sellers are getting creative and proactive with incentives, for example, offering to cover the cost of fire insurance, trimming trees and brush to create a defensible space and lowering their home prices.

“Sellers are struggling right now as often the best-case scenario is settling for a lower sale price than they would have gotten a year ago, and the worst-case scenario is holding off on entering the market until the fires and blackouts settle down,” said Hitchcock. “That’s a tough conversation for agents to have with sellers, and one that’s gotten very real in the last six months. It’s going to be some time before rural sellers feel stability back in the market, but I’m hopeful that time will calm the nerves of buyers.”

The seven counties at risk of losing the most housing value due to wildfires are also places where housing supply is declining annually. For instance, supply was down nearly 12 percent year over year in Los Angeles County in September, and it declined more than 17 percent in Orange County. Wildfires in those areas could exacerbate the housing shortage, partly because many homeowners are choosing not to rebuild after their homes are destroyed.

“Homes in places like Malibu, the hills around Los Angeles and wine country in Northern California have historically been desirable because the natural beauty of the surroundings has outweighed the risk of natural disaster,” said Redfin chief economist Daryl Fairweather, explaining that “with home buyers and sellers in fire-prone parts of California really starting to feel how environmental risk factors are impacting both the safety and value of their homes, long-term demand will change, though California overall is unlikely to lose its luster. Demand and prices for homes in fire-prone areas will go down, but as a result they’ll increase in safer parts of the state. California is in the midst of a housing shortage, and the state should take wildfire risk into account when deciding where to focus its building efforts.”