The stronger-than-expected October jobs report and big revisions to prior months shows that the labor market is resilient and that should encourage the Fed to stay on the sidelines.

The economy added 128,000 jobs in October, despite the negative impact of 42,000 striking General Motors workers, who counted as unemployed for the month. Economists had expected just 75,000 payrolls, according to Dow Jones. Payrolls for August and September were revised higher by 95,000 jobs, bringing the three month average to 167,000 per month, below last year’s average gain of 223,000.

“The labor market is still cooking,” said Ward McCarthy, chief financial economist at Jefferies. “To the extent the market had been starting to get on another rate cut in December, it’s not going to happen.”

Following the 8:30 a.m. ET report, stock futures jumped and the S&P 500 reached a new high just after the opening bell. Treasury yields rose, but rates were still not as high as they were earlier this week, ahead of the Federal Open Market Committee’s rate cut.

The Fed Wednesday cut interest rates by a quarter point and signaled it would take a pause from further moves, unless it sees a notable change in its outlook. At the time, Fed Chairman Jerome Powell said the Fed anticipates a moderately growing economy and a solid labor market.

Even though the Fed’s action was seen as hawkish, interest rates slipped, and the 2-year yield fell below the 1.65% level it was at ahead of the Fed’s announcement. It remained below that level after the jobs report, trading at 1.53%. Yields move opposite price.

“Overall, it’s a very strong read on the labor market. It’s surprising the 2-year is still lower than where it was going into the FOMC,” said Jon Hill, rate strategist at BMO. The 2-year yield hit a high of 1.56% after the jobs report, and it is the part of the Treasury curve that most reflects the Fed’s policy. 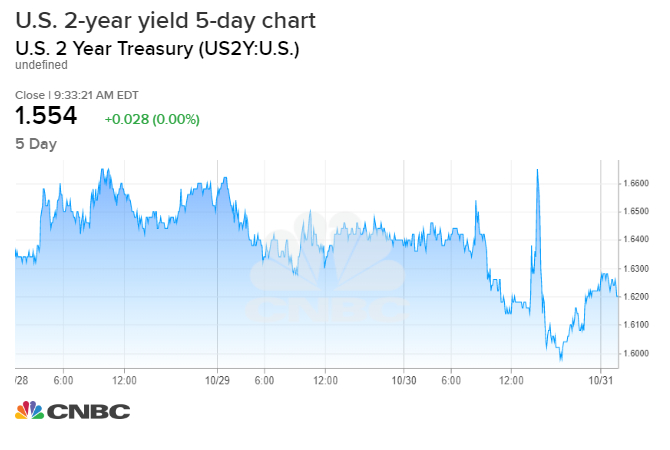 Hill said there are market players still betting on a Fed rate cut for December, but the jobs report took some of that expectation out of the market. Fed funds futures were pointing to 15.5% odds of a December rate cut, down from 22.1% Thursday, according to the CME’s FedWatch tool.

In the October employment report, a big addition in jobs came from food services and drinking places. The sector added 48,000 jobs in October, and the industry averaged 38,000 jobs over the past three months, up from 16,000 in the first seven months of the year. Manufacturing employment decreased by 36,000, less than the 50,000 expected by economists.

Inflation Adjustments: 3 Tax Numbers All Employees Must Know In 2023
Know The Times When An IRA Conversion Is Most Likely To Pay Off
Generation X carries the most credit card debt, study shows. Here’s how to get those balances down
5 Questions To Ask Yourself About Your Retirement Finances
Cryptocurrency Was Sold To State And Local Pensions As ESG