Here’s are the key numbers for the quarter ended Sept. 30:

Facebook reported revenue growth of 29% from a year earlier, marking the third straight quarter of sub-30% expansion. Competition in the online ad market has increased, in particular with Amazon becoming a bigger player, but Facebook is finding more avenues for ad growth at Instagram and through new formats like Stories.

“We had a good quarter and our community and business continue to grow,” said Facebook CEO Mark Zuckerberg in a statement. “We are focused on making progress on major social issues and building new experiences that improve people’s lives around the world.”

Facebook said it counts more than 2.8 billion monthly users across its family of apps, up slightly from the previous quarter. Its user base in Europe increased to 288 million from 286 million daily active users in the prior quarter. In the U.S. and Canada, users rose to 189 million from 187 million a quarter earlier.

Facebook Chief Financial Officer Dave Wehner said the company expects its fourth quarter revenue growth rate to decelerate by a mid to high single digit percentage from its third quarter rate. Analysts expect fourth quarter sales growth of 24%, according to Refinitiv, which would represent a slowdown of 5 percentage points.

Wehner said the 2020 deceleration should be “less pronounced.” According to analysts, revenue growth will slow next year to 22% from 26% in 2019.

Facebook anticipates 2020 total expenses will be between $54 billion to $59 billion with capital expenditures of $17 billion to $18 billion, “driven by investments in data centers, servers, office facilities and our network infrastructure,” Wehner said.

The company also announced that lead independent director Susan Desmond-Hellmann stepped down from Facebook’s board of directors effective Wednesday. Desmond-Hellmann cited she was departing as a result of “increasing demands” for her role as CEO of the Bill and Melinda Gates Foundation, her extended family and her health.

“I remain positive about Facebook and the mission to give people the power to build community and bring the world closer together,” she said in a statement. “Facebook’s Shareholders require a Board of Directors that is fully engaged and committed to address the critical issues confronting Facebook at this time.”

The company plans to name a replacement lead independent director in the coming months.

“Sue has been a wonderful and thoughtful voice on the board for six years, and I’m personally grateful to her for everything she has done for this company,” Zuckerberg said in a statement.

Zuckerberg defended Facebook’s decision to continue running political ads, even those that include false information, telling analysts that defending free expression is an important role of Facebook. Zuckerberg’s comments came after Twitter CEO Jack Dorsey announced on Wednesday that his social network would ban political ads.

“Some people accuse us of allowing the speech because they think that all we care about is making money, and that’s wrong,” Zuckerberg said. He said ads from politicians will account for less than 0.5% of revenue next year. 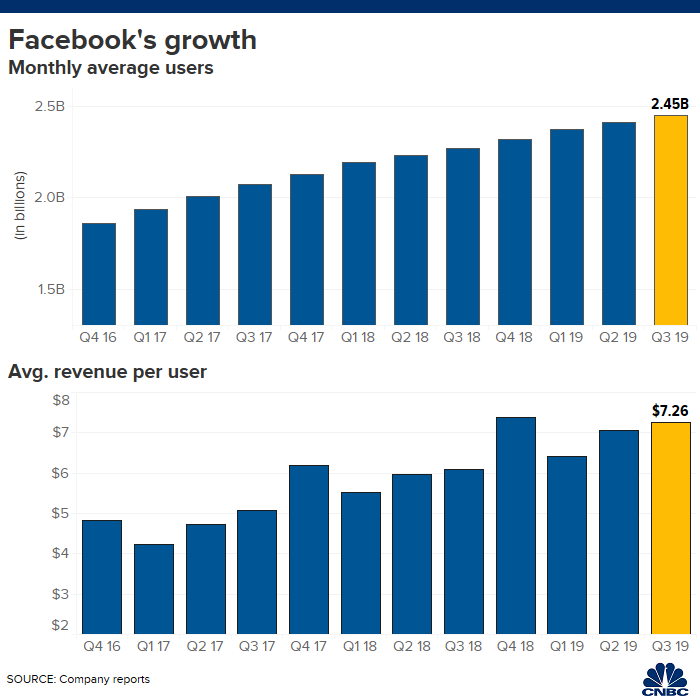 While Facebook’s financials remain solid, the greater concern of late has been at the regulatory level, where the company faces intense pressure for its mishandling of user data and, more recently, its decision to run political ads without fact-checking them. Last week, CEO Mark Zuckerberg was heavily criticized for his position on political ads when he testified before Congress in a hearing about the libra cryptocurrency, which the company is spearheading.

Still, the regulatory and political scrutiny hasn’t kept Facebook from pushing into new products. Earlier this month, it launched the second generation of its Portal smart home video-calling devices, and last week, the company launched Facebook News, a new section of the social network that shows users a personalized selection of news stories. In September, Facebook announced its acquisition of brain-computing startup CTRL-labs after striking a partnership with Ray-Ban maker Luxottica to develop smart-glasses.

Facebook is undergoing a major transition in its business as more ads move from the core News Feed to the newer Stories products, consisting of full-screen photos or videos that users can share and that then disappear. Already, the company says it has more than 500 million daily users for the Stories features across Facebook, Instagram, WhatsApp and Messenger.

Facebook shares rose more than 3% in extended trading after the report. Facebook shares are up 44% in 2019, outperforming the S&P 500, which has gained 22% as of Wednesday’s close.

Correction: This story has been updated to reflect that Facebook expects 0.5% of its revenue next year to come from ads from politicians.

WATCH: Here’s how to see which apps have access to your Facebook data — and cut them off