Chinese President Xi Jinping (R) and US President Donald Trump at the Great Hall of the People in Beijing on November 9, 2017.

After nearly two years of tit-for-tat tariff threats in the U.S.-China trade spat, the market is still not out of the woods even with the so-called “phase one” deal close to being finalized.

Wall Street now believes President Donald Trump’s trade battle with China will determine how the markets close out the year after the Federal Reserve delivered the third straight rate cut this week. Stocks took a hit on Thursday after a report saying China is casting doubt over the possibility of a long-term trade deal due to Trump’s “impulsive nature.” They then recovered to a new high on Friday.

The following are the stocks that stand to win or lose the most on the trade-war outcome and will likely be the most actively traded among investors making their bets on or against a trade pact. 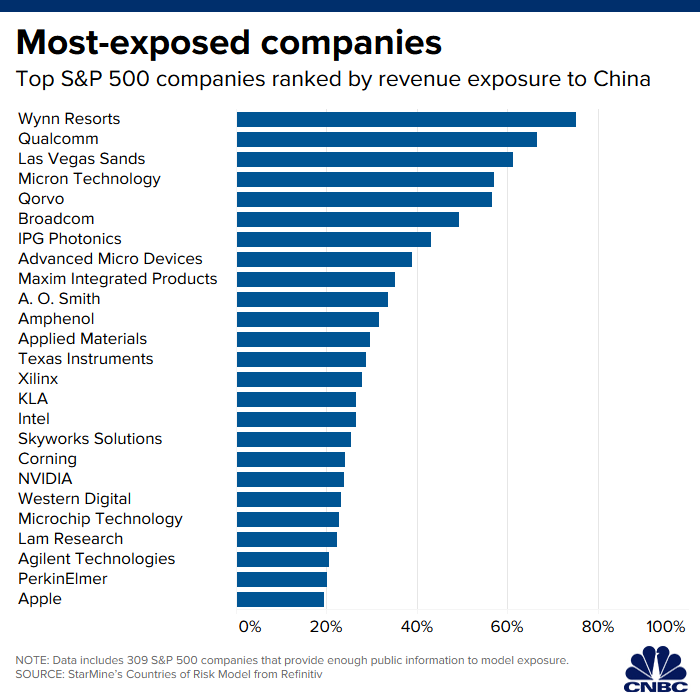 There are the usual suspects: chipmakers. The group has been particularly sensitive to trade headlines this year since the Trump administration blacklisted Huawei in May for national security concerns, halting its ability to buy U.S.-made chips. Qualcomm, Micron Technology, Qorvo, Broadcom, AMD and Nvidia are among the top 25 S&P 500 companies with the highest revenue exposure to China, according to Refinitiv.

Apple also made the list with a 19.6% sales exposure to China. The tech giant had taken a big hit earlier this year by trade-war fears as higher tariffs would raise supply costs for Apple and derail rebounding sales of the iPhone in the emerging market. Investors still remain cautious on Apple’s stock even after it reported stronger-than-expected earnings and issued an upbeat holiday forecast.

Casinos Wynn Resorts and Las Vegas Sands have significant China revenue exposure, 75% and 61% respectively, due to their big footprint in Macau. 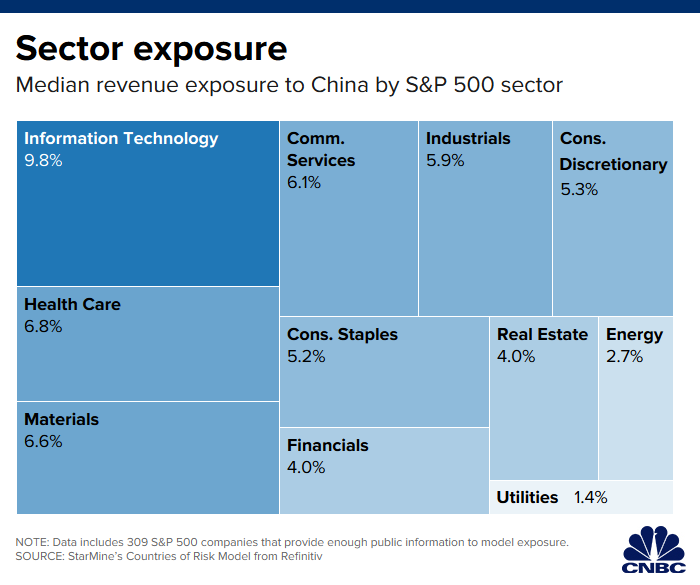 Overall, information technology is the most vulnerable to a breakdown in the trade war as the median China revenue exposure is nearly 10%, the highest among the 11 S&P 500 sectors, according to Refinitiv. Health care, materials and communication services generate more than 6% sales from China on average.

Utilities, energy and real estate are the sectors least sensitive to trade news based on their low revenue exposure to China.