You might know by now that Medicare’s annual open enrollment is underway and ends Dec. 7.

Every fall, when the program’s 60 million or so beneficiaries can make coverage changes for the next year, criminals tend to step up their game, experts say. It could involve a person pretending to be a Medicare representative, a fraudulent provider trying to prescribe you medical equipment or services, or any other undertaking with the goal of stealing your personal information or your money.

“Any time there’s anything in the news — whether open enrollment, a disaster or a law change — scammers like to latch on to it,” said Patti Poss, a senior attorney in the Federal Trade Commission’s division of marketing practices.

“They use things that are true to add credibility to their story and get you to respond,” Poss said.

Overall, the FTC has received nearly 2.4 million claims of fraud, identity theft and other scams this year through Sept. 30. The total price tag for consumers who reported losses: $1.2 billion.

While it’s hard to pinpoint all fraud instances related to Medicare, of the 332,000 reports citing government impostors, those involving Medicare or the department that oversees it — Health and Human Services — rank second (in first place is the Social Security Administration).

Many of the calls involve demands for sending a gift card or wiring money in exchange for, say, not suspending your benefits. Others are seeking your identifying information — whether your Social Security, bank account or Medicare number — which could be used to commit financial fraud. 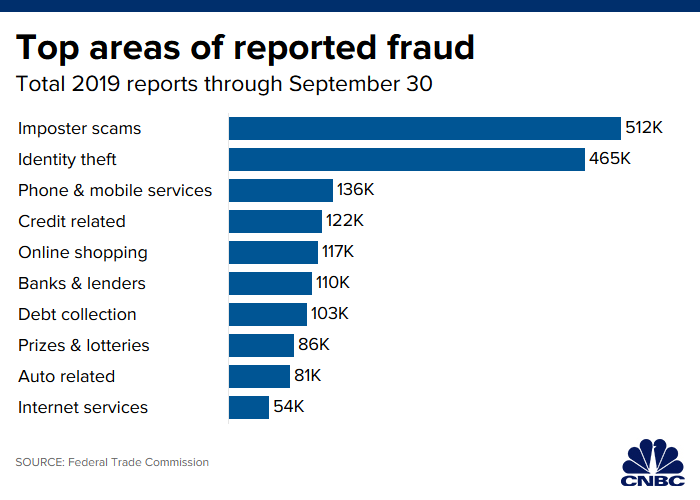 “I tell my own parents, ‘Medicare won’t call you and ask for your Social Security number,'” said Elizabeth Gavino, founder of Lewin & Gavino in New York and an independent broker and general agent for Medicare plans.

“If this happens, hang up,” Gavino said.

While just 4.2% of reported government-impostor scams included an associated loss, the average amount is $1,000 — more than three times the average $324 setback reported across all categories of fraud, FTC data shows.

This year, Medicare scams involving free or low-cost back and knee braces have appeared, according to the FTC. Basically, fraudsters try to get a consumer’s Medicare identification number to file a fraudulent claim — which could drain some of the victim’s benefits. Another known scam includes offers of free or low-cost genetic testing.

Although scammers take various routes in their methods — i.e., emails with fraudulent links, mailed advertising — phone calls tend to be their favored way of reaching Medicare beneficiaries, Poss said. And, with the technological ability to spoof numbers — make the call appear to come from a place other than the source — a call can look official.

“These scammers are very good at what they do,” Poss said.

Basically, if a caller asks for any personal information, experts say to assume it’s a scam.

More from Personal Finance:
Medicare would cover dental, vision if these bills pass
Here’s why college tuition will continue to rise
Four steps to make your home renovation a bit less painful

“Sometimes the caller will become stern and demand information, or they may hang up and then call you repeatedly,” said Danielle Roberts, co-founder of insurance firm Boomer Benefits in Fort Worth, Texas.

To report suspected Medicare fraud, you can call 1-800-MEDICARE. If you or someone you know on Medicare might have already provided personal information, you can also report it to the FTC at identitytheft.gov or 1-877-FTC-HELP.