Open enrollment season is underway for many workers.

And as employees pick their health plans for the year ahead, they may be missing out on some valuable new offerings.

Given record-low unemployment and competition to attract and keep top talent, more employers are upping the ante with voluntary benefits, according to William Ziebell, CEO of the benefits consulting division of Gallagher.

In addition to health care, there are a variety of other options that are often overlooked, such as student loan repayment, elder care, mental health assistance or pet insurance.

“Employers are looking for ways other than compensation to provide a benefit to their employees,” said David Reid, the CEO of Ease, a benefits administration company.

Still, nearly three-quarters of working adults will spend 45 minutes or less reviewing their benefits before enrolling, according to recent research by employee benefits provider Unum.

“There’s a broad landscape of benefits that are emerging,” said Rob Hecker, the vice president of global total rewards at Unum. Now, “there is a whole host of offerings to choose from.”

Here are a few of those options that could be particularly worthwhile:

Student loan assistance: Americans are more burdened by college loans than they are by credit card or auto debt. Overall outstanding student debt is a stunning $1.6 trillion.

Now, about 8% of companies, including Aetna, Fidelity and PwC, offer taxable contributions to help employees repay student loans, up from 4% three years ago, according to the Society for Human Resource Management’s 2019 Employee Benefits survey. 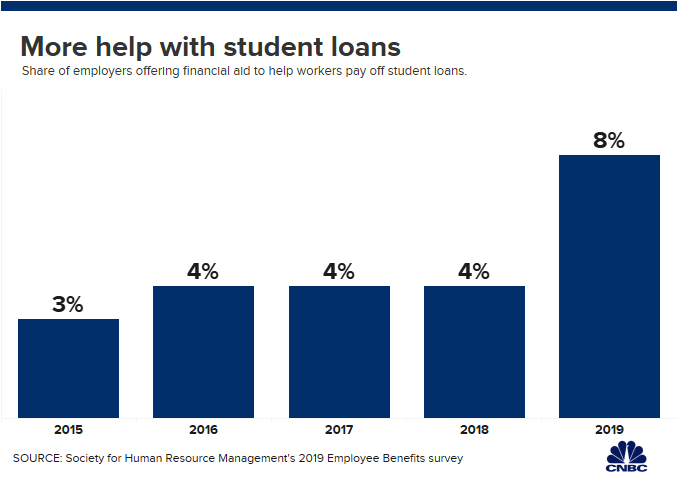 Unum is one of the growing number of businesses that have added student loan assistance to their benefits menu.

At Unum, U.S. employees can trade up to five days, or 40 hours, of unused vacation time for a payment against their student loan tab through the Student Debt Relief Program, which is managed by Fidelity.

That can go a long way for an employee struggling with student debt.

For example, if someone has a student loan balance of $26,500 on a 10-year repayment term with a 4% interest rate, a $100 a month contribution from his or her employer would free them from their debt three years earlier.

“If I were a young employee and I had that benefit, I’d be stoked,” said Reid.

Pet insurance: Nearly 70% of U.S. households own a pet, according to the American Pet Products Association, and, chances are that 1 in 3 of these pets will need emergency veterinary treatment within any given year.

The average cost of an unexpected visit to the veterinarian can range from $800 to $1,500, according to Petplan, a Philadelphia-based pet insurance company — an extra expense many Americans cannot afford.

For that reason, more employers could consider adding pet insurance to their benefits package.

“For many individuals, their pet is part of the family and if they need a surgery, having insurance can help you in that regard,” Ziebell said. In fact, “it’s one of the fastest-growing areas of coverage out there.”

As of last year, close to 2.16 million pets were insured in the U.S., an increase of 18% over the previous year, according to the North American Pet Health Insurance Association.

Mental health assistance: Roughly 1 in 5 adults in the U.S. per year suffer from mental illness, according to the National Alliance on Mental Illness.

The costs to treat depression, stress, anxiety and other ailments exceeds $200 billion a year and, for many employers, the number of sick days and lost productivity associated with mental health represent one of their biggest expenses.

As a result, companies like Cisco have begun to include mental health services among the health-care coverage options, as well as offerings such as teletherapy to help employees deal with work-life stressors and personal issues.

“A lot of companies are focused on finding tools to help manage stress before it becomes a mental health issue” Hecker said.

Elder care: An aging population, lackluster retirement savings and rising health costs are setting up more adults to become caregivers to their parents.

As it stands, about a third of adults have taken on the role of caregiver, while 22% expect to in the future, one Northwestern Mutual study found.

Of the respondents who already have stepped into that position, nearly half said their new role was unexpected, and often a financial shock.

To meet this growing need, more companies are including elder care among the benefit offerings, which can help cover the cost of care for a qualified adult dependent, according to Hecker.

Beyoncé, a $100k-a-night suite and a red carpet of influencers: Dubai basks in its booming economy
Here’s who can claim the home office deduction on this year’s taxes
Silvergate Capital shares jump after BlackRock reports increased stake in the crypto bank
How to figure out the best time to file your tax return: Don’t ‘race to the finish line,’ say tax pros
A Standout Estate Asks $13 Million In Quebec’s Prestigious Westmount