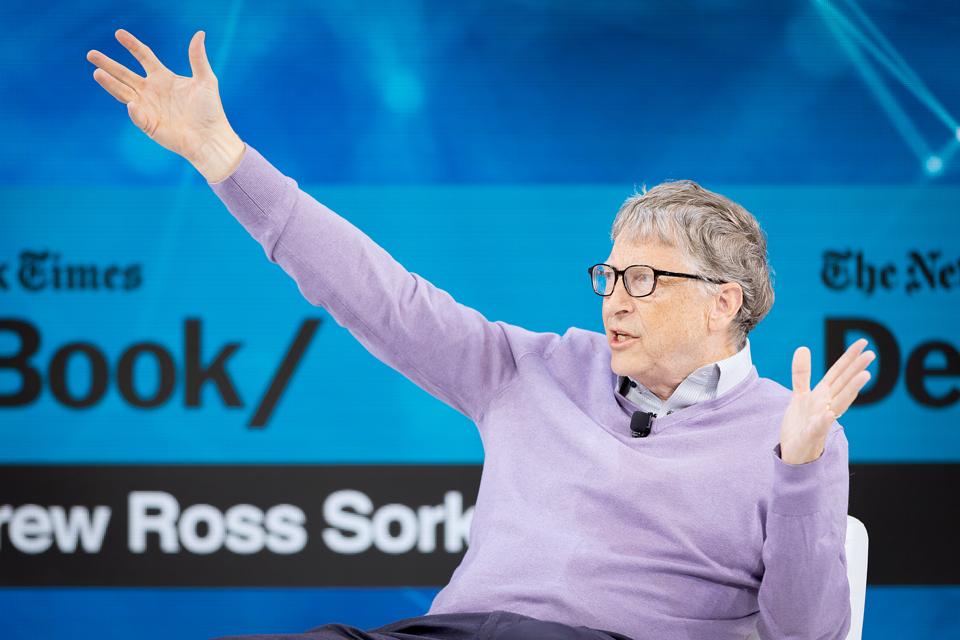 Don’t cry for Bill Gates. Or Jeff Bezos. Or Warren Buffett or Larry Ellison or other U.S. billionaires when it comes to Elizabeth Warren’s wealth tax. Because they’re still going to continue getting wealthier far faster than you or I ever will.

If that were the only issue of tax, there might not be as much pushback. Even if these and others had been paying that tax every year for the last ten, they’d be almost as wealthy as they are today.

Even a Medicare for All (M4A) payment strategy, including an additional wealth tax while not requiring most people to pay anything directly (a one-of-a-kind plan in a developed world that understands everyone who can chips in) might not have been the issue.

What undermines everything—and makes it extremely unlikely that this could pass muster even in a Democratically-controlled Congress—is how capital gains would be taxed at face value even before a profit is recognized.

Let’s step through how this all works.

What started me looking up old Forbes billionaires lists and putting increasingly convoluted equations into spreadsheet models was the back and forth between Bill Gates and Elizabeth Warren.

It started with Gates talking to Andrew Ross Sorkin at the at The New York Times DealBook Conference last Wednesday. Gates claimed he had paid more than $10 billion in taxes and that double the amount would have been “fine” as well. “But, you know, when you say I should pay $100 billion, O.K., then I’m starting to do a little math about what I have left over,” he told Sorkin. “Sorry, I’m just kidding. So, you really want the incentive system to be there and you can go a long ways without threatening that.”

Warren’s response—beside some Twitter exchanges with Gates—was to create a calculator for billionaires who wanted to know what they’d pay, with some examples like Gates, Jeff Bezos, and Mike Bloomberg. Clever trolling, but a static representation of how much someone would be expected to pay this year. However, how would that affect wealth growth?

I chose four billionaires—Bill Gates, Jeff Bezos, Warren Buffett, and Larry Ellison—and looked up their net worth, as estimated by Forbes, over the 10-year span from 2010 through 2019.

Then I created a formula that applied the tax formula to each year and then the percentage of growth from that year to the next that occurred without the tax. Essentially, I took out the tax and then assume the same market and financial dynamics would create the same degree of expansion, only on a lower amount. Below is a graph showing the wealth growth, both with and without the taxes for each of the four.

Notice how small the deviation is between the two lines for each person. Anyone claiming that billionaires would no longer have money to invest needs to sit down with a calculator and without strongly help preconceptions. Even if the tax were 3% on all wealth, that’s lower than the return wealthy people can get on their investments, which is far more than most people get.

Now for the next step.

There is some language that strike me as deceptive in the discussion. For example, “In 2019, the bottom 99% of families will pay 7.2% of their wealth in taxes, while the top 0.1% of households will pay just 3.2%.” But the taxes are on income, not accumulated wealth, on which people have presumably paid taxes. Can the wealthy minimize income taxes to a percentage that those who aren’t wealthy cannot? Yes. But pretending the taxes people pay are on wealth and not income is disingenuous.

Also, saying that people should get healthcare for free unless they are among the wealthiest also seems unreasonable. I know it can be prohibitively expensive. I’ve been self-employed for a very long time and borne the full cost of healthcare insurance for a family, even when premiums spiral upward. Control costs? Sure. But tell most people that they won’t pay anything? Please. Those who can’t still must get coverage and that’s fine as well. Those who can pay reasonable amounts should.

Where things start falling apart in complicated ways comes next.

I’ll start by saying that I don’t see any moral or ethical reason why income generated by invested capital should receive lighter treatment than making money from one’s labor. “It’s my property,” says the person who owns capital. “It’s my time and life,” the regular worker should answer.

Asking people to pay full taxes on capital gains won’t necessarily drive them away from investing, as some argue. What are they going to do, not invest and make more money? But change here is massive, which is where the resistance is really coming from.

Warren wants to tax capital gains as income when they are theoretically recognized, not when the paper gain is eventually put into real money through a transaction, like selling stock shares. Taxpayers would have to produce estimates of how the markets valued their gains and then pay tax, which is fine until the next year when all the values were different.

The graph below shows some of the implications.

What I did was consider how much was gained each year, treat the amount from the previous year as subject to wealth taxes, and apply a top marginal rate of 37% to the annual gain (assuming that people making this kind of money are seeing it all come from capital gains). When instead of a year-over-year gain there is a drop in the value, I added the tax instead of subtracting it because, under Warren’s plan, current losses would, as they do now, reduce future tax liabilities, increasing money. There are better, albeit far more complicated, ways to model the back-and-forth shift of taxes and tax credits, but this will have to do for now.

The result is a massive change, which isn’t necessarily bad in the larger scheme of things. However, the nature of taxing and then providing credits gets a bit crazy and seems to work unevenly. Instead of $96.5 billion, Gates would have $43.7 billion. But Bezos goes from $131 billion to $37.2 billion. Buffett gets $45.3 billion rather than $82.5 billion. Ellison’s $62.5 billion shrinks to $39 billion. Bigger year-to-year changes get penalized more because they come under a 37% tax rather than the 6% for wealth that builds over time.

I have no problems with taxing capital gains like ordinary income. Why should someone of wealth see lower taxes on income because they can make far more than would be possible if they depended on their own labor and time? And arguments against how the wealthy can take unrealized gains and shield them from taxation until it’s passed down to another generation that often gets to reset the tax that would have otherwise been due are valid and reasonable. Change the tax laws to prevent it.

But there’s something messy, unwieldy, and, ultimately, sneaky about a combination of promises and plans that declare healthcare will be “free” for most and that the wealthy only need pay a few pennies on the dollar of additional contributions. These are plans that start to seem more about appearance than ultimate realizable substance. It’s a particularly political form of dishonesty that has been rampant for too long. Be honest about necessary efforts and realistic expectations. Also, let politicians explicitly say what their intentions are. If it’s to make it impossible for there to be billionaires, then say so. A nod and a wink aren’t enough.

Cramer’s lightning round: I say thumbs up to MP Materials
Survey Finds That Service Members, Veterans Are Optimistic About Home Buying In 2023
BlockFi secret financials show a $1.2 billion relationship with Sam Bankman-Fried’s crypto empire
Bill Gates says no country ‘gets an A’ for its Covid pandemic response—including the U.S.
Generation X carries the most credit card debt, study shows. Here’s how to get those balances down