Traders and financial professionals work on the floor of the New York Stock Exchange (NYSE) at the opening bell on August 19, 2019 in New York City.

The S&P 500 could surge in a powerful rally to 3,850, if stocks stage the same type of breakout they had after the last two similar downturns, according to Bank of America Merrill Lynch technical research strategists.

“History suggests that breakouts from these ranges should be powerful,” the strategists wrote in a note. On the S&P 500, the 3,063 level was the “bears’ last stand.”

“Last’ week’s push above SPX 3,063 is an uncomfortable breakout for many who viewed the SPX pattern as bearish,” the strategists wrote, but added that the same was true of breakouts in late 2016 and early 2013. Those periods confirmed the end of 2-year consolidations for the S&P, and they were associated with negative macro news and global growth scares. 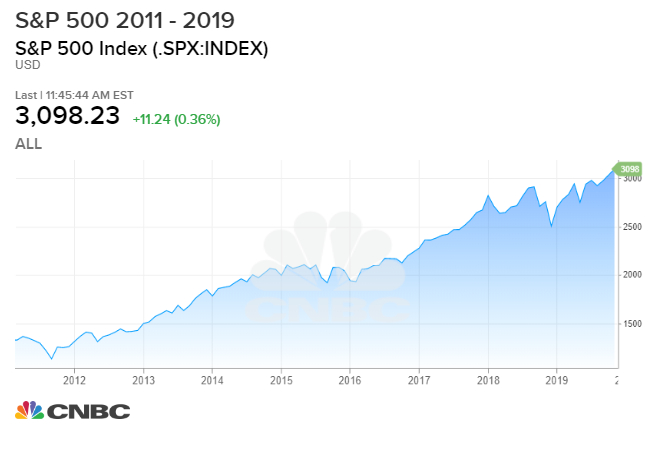 The strategists, Stephen Suttmeier and Jordan Young, also note that the rally is broadening with a breakout in the broad-based NYSE, which had lagged the S&P. The breakout is similar to those in 2013 and 2016, and also lines up with breakouts in the Russell 1000 Value, and the S&P industrial and financial sectors.

The small cap Russell 2000 has not yet confirmed the bullish move, and it needs to move above 1,596 to 1,618 to confirm it. There is, however, a breakout in the Russell 2000 advance/decline line and that may be a leading indicator for a breakout in small caps, according to Suttmeier and Young.

In the past two weeks, as stocks hit new highs, Treasury yields have also been moving higher. The 10-year yield gained more than 20 basis points last week alone. The yield was at 1.94% Tuesday.

“If the U.S. 10-year yield sustains last week’s push higher, it would support a bullish Financials (cyclicals) and bearish Utilities (defensive) trade that is similar to those coming off the 2016 and 2012 lows,” they wrote.

Be Aware Now: Here’s Where SECURE 2.0 May Hand You Unexpected Benefits
Binance was final destination for millions in funds from Bitzlato, exchange shut down for alleged money laundering
BlockFi secret financials show a $1.2 billion relationship with Sam Bankman-Fried’s crypto empire
Levi Strauss beats estimates, offers upbeat guidance for fiscal year
Roth IRA conversion taxes may be trickier than you expect. Here’s what to know before filing — or converting funds in 2023