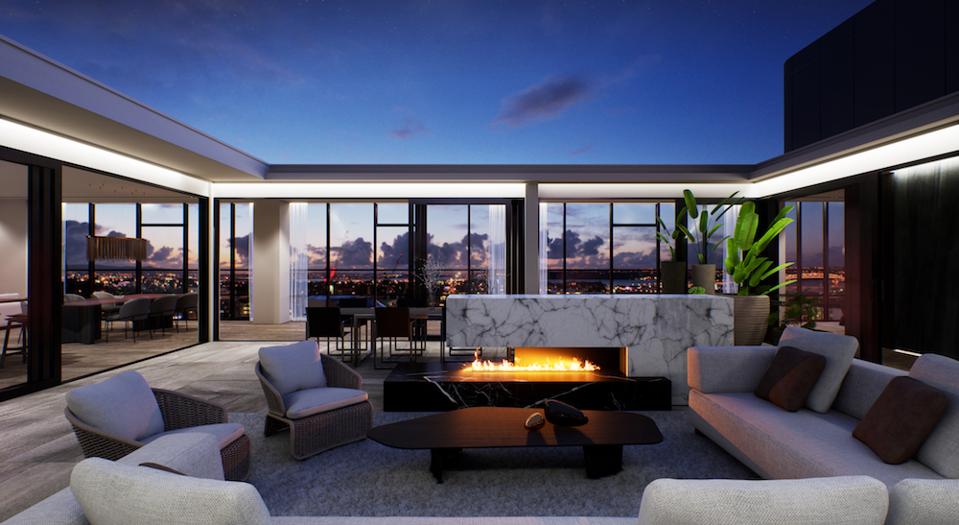 Earlier this year New Zealand—a Forbes top-ranked country for doing business—tightened the rules about who can purchase property in the country, limiting ownership rights to only those that were citizens, tax residents, spouses of the aforementioned or citizens of Australia and Singapore (due to existing free trade agreements). However before the legislation was approved lawmakers had to appease the opposition by allowing for some overseas buyers, particularly those that would bring investment money into the country’s economy. As a result, developers of newly-built large condo buildings were allowed to apply for exemptions to sell to foreigners without requiring them to apply individually for residency statues. Sales have been strong ever since.

The 90-unit International is one such building that was granted exemptions, but it did include a requirement that any owner (foreign or otherwise) is not allowed to rent out their units for terms shorter than six months at a time. Units in this building start around $1.5 million USD. White House advisor Chris Liddell set records here when he reportedly purchased the highest-priced condo sale in the country—a 7,200 square foot unit for $15.3 million in New Zealand dollars (approx. 9.6 million USD). Liddell, a New Zealand-born U.S. citizen, serves as the Deputy Chief of Staff for Policy Coordination in the Trump Administration.

While only about 3 percent of homes country-wide are estimated as being owned by foreign buyers, the number rises to 22 percent when it comes to the country’s capital of Auckland, where median sales prices have risen rapidly to $547,000 USD, compared to $361,000 for the rest of the country. But it wasn’t just price escalations that led to the final decision. Another one of the concerns was foreign buyers purchasing large expanses of historically or environmentally significant land and building modern or overly large structures, which is why the foreign-buyer exemptions were largely reserved for newly-built multi-family buildings.

Here’s a look at a few other condo buildings that have been granted the same foreign buyer exemptions as The International. As pictured above, the penthouse at The CAB in downtown Auckland is still looking for a buyer for a similarly priced unit as the one at the International ($15 million NZ, or just under $9.5 million USD). Below is the penthouse at 30 Madden, with prices from $385,000 USD up to about $4 million USD.

Below is The Pacifica (note they often have names that capture the international nature of their audience of potential buyers) has penthouses starting at about $2 million USD up to $4 million USD.

Thus far the new legislation has not been met with much of an outcry, perhaps because there is enough supply to meet the current demand. But since prices are relatively low in New Zealand compared to luxury markets in other comparably scenic destinations the demand might quickly outstrip what is currently available, which could lead to many more multi-family buildings dotting the city skyline than Auckland already has. For those that enjoy the untouched nature of New Zealand, let’s hope that day is a long way off.