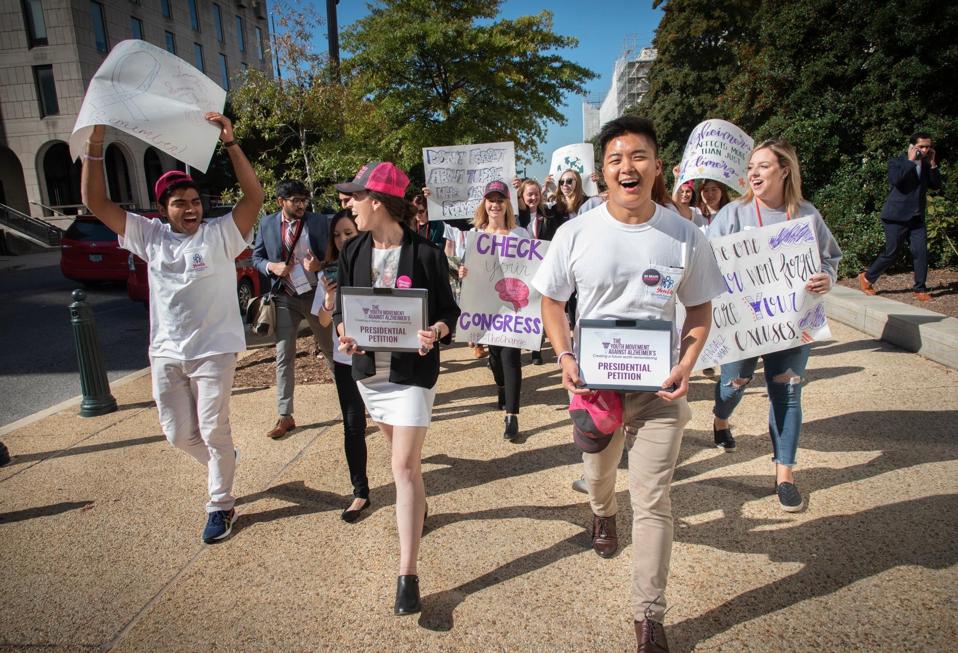 Why would a 25-year-old medical student attend a summit on Alzheimer’s disease in the nation’s capital? And why is he thinking about dementia at all?

Nihal Satyadev said he wants to change everyone’s perception of Alzheimer’s disease, and that includes young people. Members of his national endeavor—the Youth Movement Against Alzheimer’s (YMAA)—can be found in high schools and college campuses across America where Satyadev and young people of nearly every race, color and creed are creating a grassroots movement to seek a cure for the disease that they say could bankrupt America’s health care system before they are even old enough to need it. Alzheimer’s disease currently affects an estimated 5.8 million Americans of all ages. “We are youth advocates,” Satyadev said. “We are youth caregivers. We are youth researchers.”

The petition included demanding that presidential candidates and members of Congress work to:

●           Promote an early and accurate diagnosis of Alzheimer’s by encouraging early assessment, proactive brain health across the lifespan, and improved access to diagnostic tools among health providers

Their message is simple: Alzheimer’s will bankrupt the U.S. health care system if changes aren’t made. “It is and will be the greatest public health challenge in modern history,” Satyadev said. “The ramifications of the disease are not just the disease itself. If we don’t solve Alzheimer’s, we aren’t going to be able to help cancer patients or diabetic patients or any individuals who need access to the health care system. This affects everyone. This will affect our health care system like no other disease has done in the past. And the craziest part is that Alzheimer’s has been represented in only one word in one presidential debate.” Satyadev said Alzheimer’s has only been brought up once in the four democratic presidential debates so far. He and his young cohorts want to know what presidential candidates plan to do about Alzheimer’s disease. And they thought the future debates would be a good place to start in bringing more attention to curing it.

“We want it brought up in the general debates. Funding for Alzheimer’s is a non-partisan issue. People who have the disease aren’t able to advocate,” Satyadev said. “And people who care for them don’t have the time to advocate. We as youth have the opportunity to fill that void.”

According to the American Association for the Advancement of Science (AAAS) a Senate spending panel in September released a draft 2020 spending bill containing a $3 billion increase for the National Institutes of Health (NIH) that would bring the agency’s total budget to $42.1 billion. “That 7.7% boost…would complete a 40% increase in NIH’s budget over the past 5 years,” the AAAS reported. “The Senate Committee on Appropriations measure includes a $350 million increase for Alzheimer’s disease research at NIH, bringing the total to $2.82 billion…The bill also includes $492 million for the 21st Century Cures Act, which supports the Cancer Moonshot, the Brain Research through Advancing Innovative Neurotechnologies brain-mapping initiative (which would receive $500 million overall, a $71 million increase), and the All of Us precision medicine study (funded at $500 million, an increase of $161 million)…”

Satyadev started the Youth Movement Against Alzheimer’s while he was a student at the University of California, Los Angeles (UCLA). He said after attending the Alzheimer’s Association Advocacy Forum in Washington, D.C. in March 2015, he was disappointed to learn how little youth advocacy there was for Alzheimer’s disease—that few if any of the other 1,100 conference attendees were under the age of 25.

Today the YMAA has 31 chapters in 15 states in the U.S. where they encourage young people to volunteer in local nursing homes and senior centers.

“Our goal is to get young people to realize that Alzheimer’s has more complications than just memory loss,” he said. “Right now, Alzheimer’s is 7% of our entire federal budget. Looking downstream, it is quite calamitous. We want to get young people to realize that it’s not only about helping older adults, it’s about the ramifications for the entire health care system. This nation needs to prioritize finding a cure and also implementing more comprehensive care-giving solutions for family caregivers. Finding the cure is several years away and in between there are several things that can be done.”

Satyadev and his team of volunteers has already started practicing what they preach. The group developed a caregiving model of respite care at UCLA and donated some 6,500 hours of assistance to family caregivers who wouldn’t otherwise get any breaks. Dubbed “TimeOut @ UCLA,” the program pairs student volunteers with patients at OPICA’s Adult Day Program and Caregiver Support Center in Los Angeles. Volunteers visit their patients weekly for three hours at a time to talk to them, giving the senior patients a social outlet and allowing their primary caregivers a short break (respite) from their duties.

Another YMAA program called YouthCare ran during 2018, wherein volunteers provided clinical oversight free of charge for all student-older adult pairs. Caregivers were offered an opportunity to drop off their loved one in a community center in downtown Los Angeles and enjoy a worry-free afternoon. This program is currently on hold as organizers move to create a new model that will serve families directly in their homes. The program is expected to relaunch in early 2020.

The YMAA originally sought to fund Alzheimer’s research in addition to its caregiving efforts. To that end, the organization in 2016 launched a clinical research program—the Alzheimer’s Research Scholarship Program (ARSP)—at UCLA that awarded scholarships to undergraduate students who would research neurodegenerative diseases.  This program operated for a year, however Sadyadev said the movement now focuses its efforts primarily on volunteer care-giving and advocacy. “As the organization grows bigger, we hope to bring back the scholarship program,” he said.

Satyadev and his young cohorts are convinced that Alzheimer’s will eventually bankrupt the U.S. health care system if changes aren’t made. And they aren’t alone. According to the Alzheimer’s Association, Alzheimer’s is the most expensive disease in America, costing more than cancer and heart disease. “In 2019, the direct costs to American society of caring for those with Alzheimer’s and other dementias will total an estimated $290 billion,” the Alzheimer’s Association reports. “A study found that in the last five years of life, the costs of a person with dementia, on average, total more than $287,000 (in 2010 dollars). This is compared with $175,000 for a person with heart disease, and $173,000 for someone with cancer. Most of these costs are borne by Medicare and Medicaid. In 2019, Medicare and Medicaid will spend an estimated $195 billion caring for those with Alzheimer’s and other dementias—67 percent of total costs.”

The Alzheimer’s Association reports the statistics are grim:

“It is and will be the greatest public health challenge in modern history,” he said. “The ramifications of the disease are not just the disease itself. If we don’t solve Alzheimer’s, we aren’t going to be able to help cancer patients or diabetic patients or individuals who need access to the health care system. This affects everyone. This will affect our health care system like no other disease has done in the past.”

In an attempt to contribute to the cause and help those directly affected by the disease now, the YMAA, through 47th District Assembly Member Eloise Reyes, has introduced a bill in the California state legislature that outlines its care-giving model and proposes a feasible solution. “It’s the idea behind creating an Americorp-type model for caregiving,” Satyadev said. “You have a trained college or high school graduate providing non-medical respite care for people with early to mid-stage dementia. This allows caregivers to go back to their jobs and simultaneously alleviates their burdens.”

Satyadev said his proposal would allow older people with dementia to age in place longer and save the health care system billions. “If you allow an older person with dementia to age in place for two more months and you scale the program to reach 1% of Americans who have dementia today, that would save our healthcare system $1 billion annually,” he said. “Based on current Medicare prices for nursing homes and assisted living facilities, if you take two months times the Medicare cost of being in a nursing home times the number of people who have dementia, you get a $1 billion cost savings. This doesn’t even include mental health services for caregivers.”

Satyadev has witnessed the financial and emotional costs of Alzheimer’s in his own family across the ocean. He has for years assisted in caregiving for his grandmother, Siromani Ananthula, in India. Now in the late stages of dementia, Ananthula was diagnosed over a decade ago. The 83-year-old was once the chief of ophthalmology at a major hospital in India.

Born in New Jersey and raised in California, Satyadev went on from UCLA to get a degree in computer science from the University of Redlands in Redlands, California. From there he earned a master’s degree in public health from George Washington University in Washington, D.C. He is currently a medical student at the University of Medicine and Health Sciences (UMHS) in Basseterre, Saint Kitts in the Caribbean.

Luxury retailer LVMH is optimistic as it sees Chinese shoppers and tourists returning
House GOP study group is proposing changes to Medicare. Here’s what you need to know
Rent prices have dropped the most in these 5 U.S. metro areas. Why it’s cheaper to rent in many markets
How To Avoid The 5 Most Frequent Reasons Retirement Plans Fall Apart
Your 2023 Guide To Entertainment And Meal Deductions