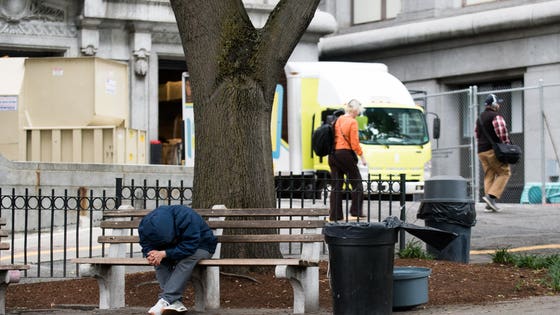 “Without serious attention and planning, we will have elderly paupers on our streets and in our parks in large numbers,” Dr. Joanne Lynn, policy analyst for the Program to Improve Elder Care at the Medicare and Medicaid consulting firm Altarum asserted.

Her warning came in a House Ways and Means Committee hearing on the coming financial tsunami facing Boomers as they surge into their late 60s and beyond.

On Medicaid, which is often used by seniors to pay for long-term care when they run out of money, Lynn and Elder Justice Coalition National Coordinator Robert Blancato warned high demand by Baby Boomers could lead to restrictions on entrants and services in the program by the 2030’s.

Long-term care could become out of reach for Boomers who had led financially secure lives when they were working as their savings are drained to pay for immediate health care needs, Blancato cautioned.

“(Boomers) will be unable to afford essential supports and will have to confront homelessness, food insecurity, inability to manage personal hygiene,” Lynn, a gerontologist asserted.

To make more housing available for aging Boomers when the crisis hits in the coming 10 years, Dr. Lynn said housing codes could start requiring basic disability adaptation in all units, low income housing vouchers could be more readily available, and elderly persons living in tents and cars could have some priority in obtaining housing before exposure makes them so sick as to require nursing home care.

“Now is the time to enact legislation to build greater capacity in housing that works for people across their lifespan through state grants. Housing stock that would be safe, affordable and accessible, would prevent having to live in a nursing home when disability sets in (often paid by Medicaid) for lack of available housing.” Lynn told the House committee.

Other solutions she has advocated for the long-term care financial crisis include: incentivizing personal saving for retirement, long-term care services and support  insurance, and long-term care; investing in the work-readiness of young people so that the economy is strong, and can yield more tax revenue; standardizing and improving the quality of geriatric medical care.

She also advocated enabling communities to drive down the per capita cost of disability in old age and improve reliability and appropriateness of services through local innovation and collaboration.

“The number of hospice and palliative care physicians and members of the interdisciplinary team will drop dramatically over the next two decades,” Banach warned.

Older black/African Americans are twice as likely to have Alzheimer’s and other dementia as whites, one and a half times that of Hispanics, he said.

“Avoidable pain, degrading conditions, and substandard care are a part of hundreds of thousands of nursing home residents’ lives every day,” Mollot said.

He noted inspectors uncovered repeated violations of the same requirement three or more times over three years in more than 40 percent of nursing homes.

“But less than half of all nursing homes have received any federal fine whatsoever in the last three years and, of those, the average amount is approximately $1,600,” Mallot said.

He added while more than 50 percent of residents in assisted living and nursing homes have some form of dementia or cognitive impairment and 67 percent of dementia-related deaths occur in nursing homes, many facilities fail to equip their staff with the knowledge and skills necessary to provide comfort and care.

The consumer advocate pointed to Illinois state inspectors claiming housekeeping and maintenance services at Alden Town Manor in the Chicago suburbs of Cicero had minimal harm despite finding maggot infestation on resident’s genital area at the Alden Town Manor.

In a June report, the Government Accountability Office said it is imperative that the government agency responsible for ensuring nursing homes protect residents from abuse beef-up its oversight.

However, the authors of the study complained cthose reports often can take weeks or months currently because CMS requires state agencies to tell police or other authorities about abuses only after they are substantiated.

“Two (state) Medicaid Fraud Control Units d we interviewed told us the delay in receiving referrals limits their ability to collect evidence and prosecute cases—for example, bedding associated with potential sexual abuse may have been washed, and a victim’s wounds may havehealed,” the GAO report said.