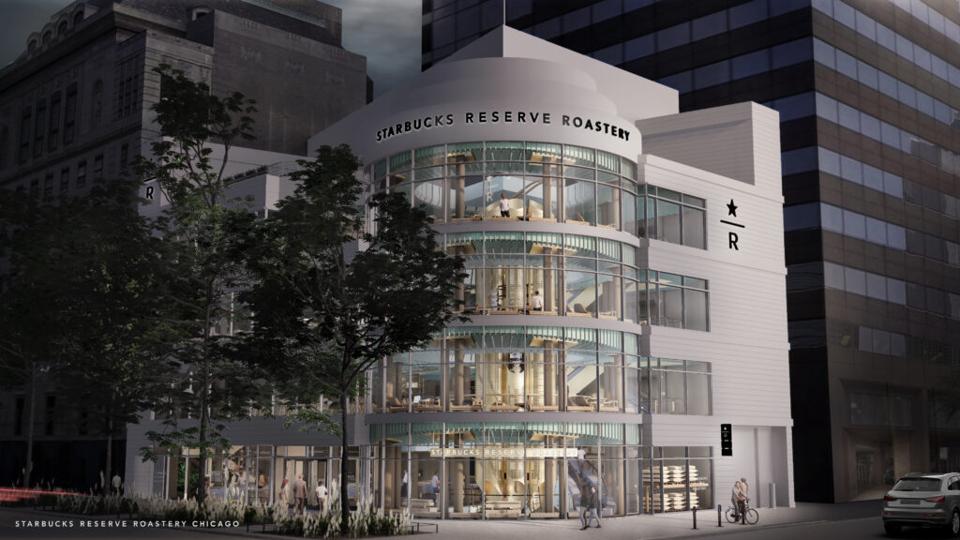 Located on Chicago’s Magnificent Mile at the intersections of Michigan Avenue and Erie Street, the opening of Chicago Reserve Roastery marks Starbucks largest-ever coffee retail space to date. According to a press statement, visitors “will be able to see, hear, and learn about coffee’s extraordinary journey through intentional and unparalleled design, while enjoying a menu featuring unique beverages exclusive to this location.”

The Chicago location is Starbucks sixth Roastery globally and third in the U.S., joining U.S. locations in Seattle and New York. According to Starbucks CEO Kevin Johnson, the Roasteries are located in select flagship cities and designed to “amplify the Starbucks brand, serve as innovation hubs, and create experiences for millions of customers around the world.”

The opening of the Chicago Roastery also marks a significant retail shift for this noted Michigan Avenue address, originally built in 1990 by Chicago architects Solomon Cordwell Buenz as a Crate & Barrel store.

The landmark Chicago structure is synonymous with the clean-lined Scandinavian aesthetic championed by Gordon Segal, who with his wife, Carole, founded Crate & Barrel in 1962 (Segal retired from the company in 2008). And for Starbucks Vice President of Design and Concept, Jill Enomoto, the building’s origin story played a significant role in her team’s approach to the redesign. “For folks who grew up in Chicago, this building is really quite iconic,” Enomoto said. “Gordon built this building with beautiful windows and fenestration and light. The skylight he designed to bring light to the different floors, the escalators to bring customers up a multilevel flagship store – it was all pretty groundbreaking.”

“What a fantastic opportunity for Starbucks to come into this very iconic building and put a Roastery in here.”

While there has been much speculation surrounding the changing of the guard at such a renowned commercial retail address, Segal, in fact, played an integral role in bringing the Roastery to this space. After learning in the spring of 2016 that Crate & Barrel would not be renewing their lease at the Michigan Avenue location, Segal noted, “my wife and I said to ourselves that if we could not have Crate & Barrel there, we wanted something that would be very exciting and experiential that would show off the building.” Segal began talks with Starbucks, theorizing that bringing one of their large-scale Roasteries would be “one of the more exciting things we could do with the building.”

In response to this new iteration of his former retail space, Segal stated, “it is really beyond my expectations. It is very beautiful, very Scandinavian in feeling…We put in a circular escalator, to provide a spectacular ride up to the second floor. And as you go up to the third and fourth floor, it becomes more and more exciting. I’m so very pleased with the way it turned out. It is beautiful.”