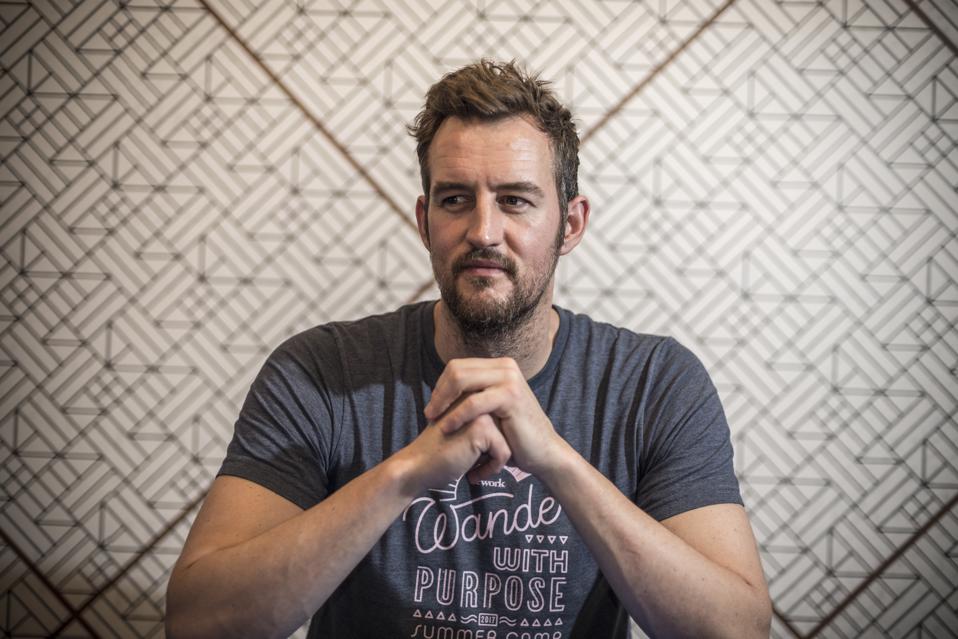 As the once-hot office-sharing startup WeWork imploded this fall, frustrated investors pushed out its charismatic and erratic cofounder and CEO, Adam Neumann. The company’s other cofounder?, Miguel McKelvey, 45, an under-the-radar presence compared with the outsize Neumann, stuck around in the vaguely defined role of chief culture officer.

McKelvey was a big part of the founding story and was photographed alongside Neumann when Forbes first profiled WeWork in 2014. But by the time SoftBank was considering an investment in 2017, Neumann alone delivered the now infamous 12-minute pitch to SoftBank boss Masayoshi Son that raised $4.4 billion for WeWork globally.

This year, as the company was gearing up for its much-anticipated initial public offering, McKelvey had largely been written out of the official narrative. In WeWork’s original registration statement from August, “Adam” was named 169 times, while McKelvey appeared just six. Even Neumann’s wife, Rebekah Paltrow Neumann—cousin to Gwyneth and retroactively named a company founder in January—got more ink, with 20 mentions. It was Neumann who promoted some of WeWork’s crazier expansions, including a WeGrow school, Rebekah’s pet project.

“As Miguel focused on more culture things, Adam focused on, frankly, the things that were driving headlines,” recalls a former executive who asked to remain anonymous because of a nondisclosure agreement. “The value was created in Adam’s ability to raise money from Masa, which Miguel was not involved in directly.”

But after the company pulled the IPO in September and had to be bailed out by its backers at SoftBank, it was McKelvey who sent an inspirational email to the demoralized staff. “It’s been a challenging period, and it takes fortitude to continue to believe,” he wrote in late October. “We have an amazing team and incredible brand—and with renewed focus, we have the opportunity to build an outstanding business.”

On October 23, SoftBank’s Marcelo Claure, installed as executive chairman of WeWork, tweeted out that he’d spent “a very late night” at Sprint headquarters talking with McKelvey and learning about WeWork’s culture.

McKelvey’s decision to stay affiliated with the company—and investors’ decision to allow him to do so—stands in stark contrast to Neumann’s unceremonious ouster, albeit with a $1.7 billion exit package. Once so entwined that they chose to hold their shares in WeWork through a singular entity, known as We Holdings LLC, set up in 2010, the two appeared to grow apart in recent years as WeWork’s valuation soared to a peak of $47 billion as investors poured in more than $9 billion.

When WeWork released securities filings for the planned IPO, it revealed a business that had lost $1.9 billion on revenue of $1.8 billion in 2018, and those losses have continued to expand, reaching $1.25 billion in the third quarter, according to a recent report to debt holders.

In the wake of the SoftBank bailout, Forbes estimates that McKelvey’s net worth has fallen to $900 million from a peak of $2.9 billion. Exactly how or whether the We Holdings entity, which is domiciled in Delaware, has been unwound is unclear. McKelvey declined to talk to Forbes, and SoftBank declined to comment.

For McKelvey, the lower-key role of focusing on employees—and culture—was a good fit. At WeWork he was known for holding fireside chats on topics like building resilience and for bringing in coaches, including relationship therapist Esther Perel. “There’s no such thing as ‘making it,’” he said in a commencement speech at his alma mater, University of Oregon, last year. “As soon as you think you have it figured out, as soon as you have your shit together and your life is moving in the right direction, something is going to come and turn it all around and flip it upside down.”

McKelvey and Neumann were raised in communal atmospheres—Neumann on a kibbutz in Israel and McKelvey as one of six kids in a five-mother commune in Eugene, Oregon. The children grew up gardening and on food stamps, drinking Tang as a special Christmas treat. (One of McKelvey’s communal siblings works at WeWork.)

He earned an architecture degree at the University of Oregon and also played basketball there for two years. (Like Neumann, he is exceptionally tall, at 6-foot-8.) After college, he moved to Japan, starting a website that connected Japanese and English pen pals. Eventually he landed a job with an architecture firm in Brooklyn.

McKelvey and Neumann struck up a friendship at a party, and Neumann asked McKelvey to design new office space for one of his ventures. “We are totally different people. For whatever reason, we just connected, ” McKelvey said on the How I Built This podcast in September 2017.

Inspiration struck in January 2008 when Neumann began renting out part of his office to someone he found on Craigslist to cut costs. After Neumann struck a deal with landlord Joshua Guttman, McKelvey stayed up all night working up a name, a logo and a website for Greendesk, an eco-friendly shared office stocked with free-trade coffee. Despite the financial crisis later that year, space filled up quickly.

That early deal morphed into WeWork after they sold Greendesk to Guttman and used the funds for the new business. “It seemed so obvious to us,” McKelvey told Forbes in 2014. “What was out there for office space was not good—it sucked.”

As the company expanded, Neumann increasingly became the face of the business, while McKelvey searched for his role. “I like to be next to the center of attention,” McKelvey said on How I Built This. “I like the idea of it, I just don’t want to be it, but I really enjoy the energy that comes from that.”

WeWork’s management team struggled to define new roles and responsibilities as it grew rapidly, hiring thousands of workers. With his early role in design and construction now handled by a staff of people, McKelvey took on the title of chief culture officer in the summer of 2017. (That same year he divorced from his wife, Hiyam, founder of Pucker Makeup.) “He talked a lot about Culture OS, which was this sort of operating system he thought he might be able to drop into companies as a way of refreshing company cultures,” the WeWork executive recalls.

McKelvey, who is vegan and celebrated his 45th birthday with a Beyond Meat barbecue, also appears to have been a driving force behind WeWork’s 2018 decision to ditch meat, including prohibiting employees from expensing meals that included it. “Absolutely certain this is one of the best things we’ve ever done,” he wrote on his Instagram account.

But there were also signs of trouble in the culture: In 2018, a former WeWork employee, Ruby Anaya, alleged in a lawsuit in New York State Supreme Court that the startup’s “frat-boy culture” had enabled sexual misconduct and punished employees for coming forward. She named McKelvey, her supervisor, personally for ignoring her pleas for help. WeWork denies the allegations, and claims against McKelvey were dropped.

McKelvey’s reputation remained largely unscathed as pre-IPO scrutiny brought ridicule over Neumann’s judgment for pushing WeWork to spend millions on a wave-pool business and for launching his wife’s experimental school. Filings also showed potential self-dealing, including Neumann making millions as a landlord to WeWork and collecting $5.9 million for use of the trademark “We” after rebranding WeWork to The We Co. in January. (He eventually returned the money.) In September, the Wall Street Journal reported details about his drinking and getting high on a borrowed Gulfstream G650 private jet, behavior that seemed to be a final straw for investors who forced him out less than a week later.

On November 6, SoftBank’s Son admitted his ”really bad” judgment as his massive tech investment fund reported its biggest loss in its 38-year history. WeWork is now searching for a new CEO, and planning thousands of layoffs. McKelvey is still around.

Tourism is roaring back in China. But the $6 trillion consumer market is digging itself out of a deep slump
Annuity sales hit record last year, eclipsing sales during 2008 financial crisis amid fear, higher rates
Stocks making the biggest moves after hours: Whirlpool, NXP Semiconductors, UnitedHealth and more
Luxury developers in Los Angeles bet someone will pay record prices for these condos
Ask Larry: When Should I Switch To My Social Security Retirement Benefits?