The Federal Communications Commission (FCC) announced on Monday that it will publicly auction off a valuable telecommunications asset, in a move investors viewed as a blow to U.S. satellite communications provider Intelsat.

Shares of Intelsat dropped more than 40% in heavy trading volume after FCC Chairman Ajit Pai said in a tweet that his agency “must free up significant spectrum” for 5G telecommunications. The FCC told CNBC that it expects an auction to happen “before the end of 2020.”

“I’ve concluded that the best way to advance these principles is through a public auction of 280 megahertz of the C-band,” Pai said. “I’m confident they’ll quickly conduct a public auction that will give everyone a fair chance to compete.”

C-band spectrum is a key telecommunications wavelength the FCC regulators. Four satellite operators, including Intelsat, provide C-band services in the U.S. to about 120 million households. The FCC wants to repurpose the C-band spectrum for 5G and an auction is expected to raise tens of billions of dollars. But a public auction would see the proceeds go to the government, an option the satellite operators – organized as the C-Band Alliance – have opposed.

“The fundamental issue here is that there’s the ideal and there’s the practical. Everyone recognizes the best use of this spectrum is for 5G services – but what is the most economical and timely way to do that?” Chris Quilty, president of satellite financial services firm Quilty Analytics, told CNBC. Quilty formerly led Raymond James’ coverage of sattellite communications and the broader space industry for 20 years.

The C-Band Alliance have been pushing for a private auction. The group on Friday gave a proposal to the FCC where the satellite operators would keep some of the proceeds while paying taxes on the sale, as well as contributing at least $8 billion to the U.S. Treasury and possible helping fund a rural 5G network.

“The private auction would generate billions in proceeds for Intelsat and the other C-band operators,” Quilty said. “The potential C-band proceeds gave Intelsat a path for deleveraging, which has otherwise escaped the company for the past 10 years.” 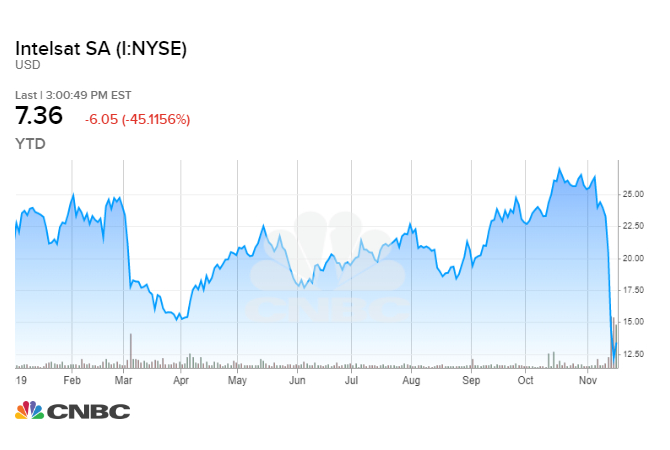 Intelsat had a market value of about $1.8 billion before trading began on Monday. Even before the latest drop, Intelsat’s stock had dropped more than 10% on three consecutive trading days as the tide shifted against the C-Band Alliance. The FCC’s announcement of a public auction means the satellite companies may not recoup the value of their C-Band investments, such as the expensive satellites.

“What we’ll likely see happen, which is the worst case scenario, is that the satellite operators have every incentive to drag their heels and take this to the courts, because they’re no longer being compensated for this spectrum,” Quilty said. “People are assuming they’re still going to get something but they’re not going to get the $8 billion to $10 billion windfall they were expecting.”