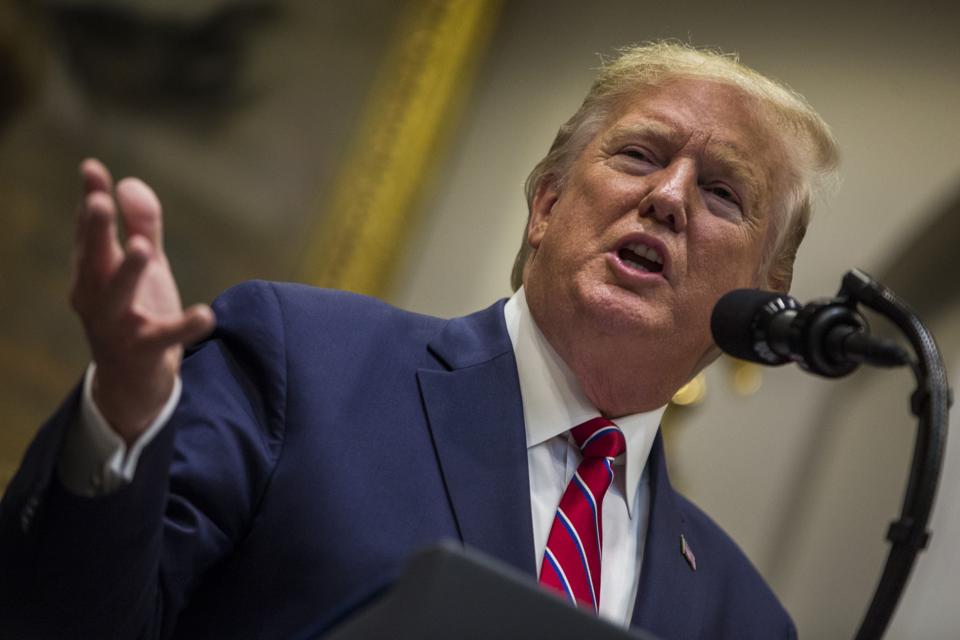 Lots of people want to see President Trump’s tax returns, including members of Congress, New York state prosecutors, and — judging by the intense media attention — more than a few voters.

But what do people expect to find in those returns? And why is the president resisting their release so vigorously? After all, every president for the past 40 years has disclosed his tax returns.

One popular theory: Trump is shy about revealing how little income tax he’s paid over the years.

And by little, I mean zero. The Washington Post, Politico, and The New York Times have all reported that Trump paid no income tax in numerous years before he entered politics.

If that’s embarrassing for Trump, it’s easy to understand why. While far from universal, individual income taxes are still a touchstone of American fiscal citizenship.

But honestly, if Trump is feeling self-conscious, he might take some solace in the history of presidential taxpaying — or nonpaying, as was the case for many decades.

This oddity stems from the Constitution’s requirement that “the president shall, at stated times, receive for his services, a compensation, which shall neither be increased nor diminished during the period for which he shall have been elected.” Until at least the late 1920s, this provision was widely understood (by lawmakers, presidents, and the federal courts) to prohibit the taxation of presidential salaries.

As a result, Presidents Abraham Lincoln, Andrew Johnson, Ulysses S. Grant, William Howard Taft, Woodrow Wilson, Warren G. Harding, and Calvin Coolidge seem to have avoided (partially or completely) the income taxes enacted during their terms in office. Several made payments on other kinds of non-salary income, but all avoided paying any taxes on their official “compensation.”

Lincoln paid income taxes throughout his presidency. The Revenue Act of 1862 provided for a special 3% tax on the salaries of every person in the “civil, military, naval, or other employment of the United States.” Members of Congress took pains to include themselves, explicitly requiring that taxes be withheld from the salaries of “senators, representatives, and delegates in Congress.”

Notably absent from this legislation: any requirement that the president pay income taxes.

The same can’t be said for Supreme Court justices, who enjoyed a similar constitutional protection against any diminution of their compensation. Chief Justice Roger B. Taney objected vehemently to the payment of any tax on his salary. “I regard an act of Congress retaining in the Treasury a portion of the compensation of the judges as unconstitutional and void,” he wrote in 1863 to Treasury Secretary Salmon P. Chase.

Taney’s letter got no response, and both federal judges and the president continued to have tax payments withheld from their salaries throughout the Civil War. But in 1869 Attorney General Ebenezer Rockwood Hoar advised Treasury that judicial and presidential salaries could not be taxed. Lincoln’s estate filed a claim, and Treasury refunded all taxes paid by Lincoln, as well as those paid by Johnson and Grant.

Congress allowed the income tax to lapse in 1872, and it didn’t return for more than 40 years. In crafting a new tax law in 1913, Congress accepted Hoar’s reasoning from 1869 and made presidential salaries explicitly nontaxable.

Even without an exclusion, Taft would have only barely been subject to income tax on his official salary. Because he relinquished the presidency March 4, 1913, only the compensation earned during his last three days in office would have been taxable, given the oddities of that first modern tax law.

Still, when filing his tax return in 1914, Taft reported a prorated salary of $625 for those last three days. According to historian James F. Vivian, author of the 1989 article “The Last Tax-Exempt President,” Taft also included a notation on his Form 1040 indicating that the sum was “exempted by the Constitution.”

Like Taft, Wilson paid no taxes on his official compensation for tax year 1913. Unlike Taft, he didn’t bother to mention that income on his return; the relevant line on his Form 1040 was simply blank. Wilson’s returns for 1914 through 1917 similarly omitted any reference to his official salary.

In 1918 Congress made a stab at taxing presidential (as well as judicial) salaries. But in 1920 the Supreme Court put the kibosh on that idea, at least for the judges. Wilson successfully convinced internal revenue officials that the court’s decision in Evans v. Gore, 253 U.S. 245 (1920), should also apply to presidents, and he got a refund for tax payments he already made on his 1918 and 1919 salary.

Upon assuming the presidency in 1921, Harding declared his intention to pay taxes on his salary. And he seems to have made good on that promise during his abbreviated presidency.

But in February 1926 The New York Times reported that Coolidge had received a $7,000 tax refund, representing taxes paid on his official salary for 1923 (Coolidge had been president from August 2, 1923, onward, having assumed the office upon the death of Harding). The commissioner of internal revenue had ruled that the decision in Evans v. Gore made presidential income taxes unconstitutional. As a result, Coolidge was due a refund, as was Harding’s estate.

After Coolidge, the trail runs cold for anyone tracing the history of presidential taxpaying. Since personal tax records of former presidents are protected from official disclosure, we know only what presidential families have been willing to voluntarily disclose. Wilson’s tax records are available from the National Archives, but returns filed by Harding and Coolidge are not. What we know about their taxpaying comes from newspaper reports.

For Herbert Hoover, even those secondary sources fail to fill the gap. It remains unclear whether he paid income taxes on his official compensation as president.

Franklin D. Roosevelt, however, paid income taxes throughout his presidency; his returns, which include his official salary, can be found on the Presidential Tax Returns website. So can those of Harry S. Truman, whose returns also indicate that he paid taxes on his Oval Office compensation.

We know for sure, however, that every president since Richard Nixon has paid taxes on his official salary. Since 1973, every president has released a tax return during every year in which he has held office.

Glacier-Surrounded Hunting Lodge Carries On A 100-Year Tradition In New Zealand
Rocket Lab establishes new U.S. foothold with successful launch after years of delays
Bill Gates is ‘very optimistic’ about the future: ‘Better to be born 20 years from now…than any time in the past’
Is Delaying Social Security Benefits Still A Good Deal?
Carmakers face a crossroads as they work to fit auto dealers into their EV plans