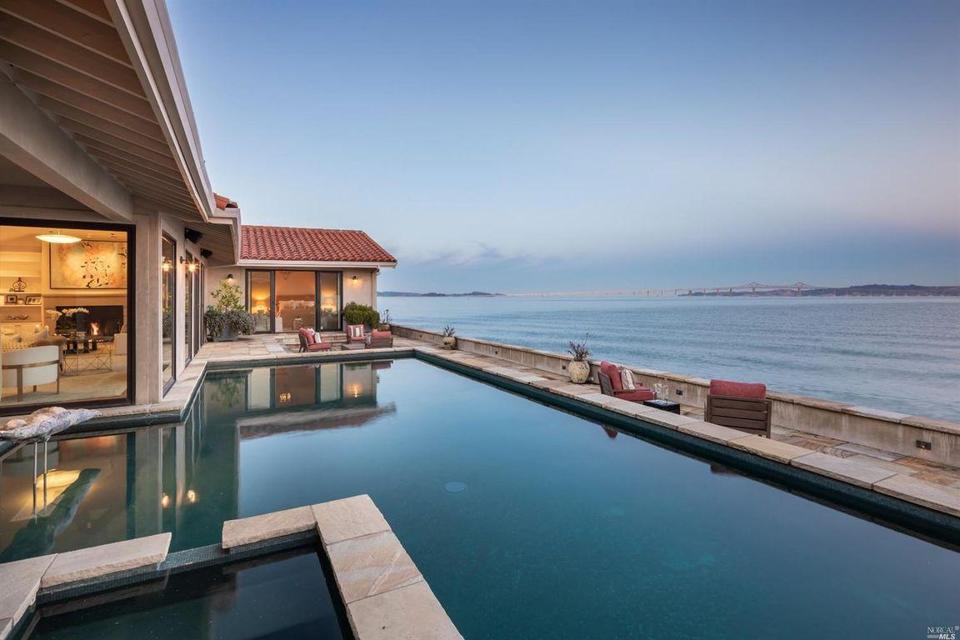 The late beloved comedian Robin Williams’ house on San Francisco Bay just hit the market, listed at $7,250,000. Located in Tiburon, a very expensive address, the 6,517 square foot home sits on some of the country’s priciest real estate. Set on a third acre double lot where privacy is key in this exclusive Paradise Cay neighborhood. Technically the home is in Belvedere Tiburon. The median income in Tiburon according to City-Data.com was $164,741 in 2017.

The town of Tiburon which had a population of 8,962 according to the 2010 census is in Marin County, just a few miles north of the Golden Gate Bridge. It has easy access into San Francisco via Highway 101 or the numerous ferries that take both residents and visitors back and forth across the Bay. Williams’ Mediterranean contemporary style home boasts water views to the Golden Gate Bridge and the Marin Headlands.
Williams who passed away on August 11, 2014, originally hailed from Chicago. He was a long-time San Francisco resident living for many years in the exclusive Sea Cliff neighborhood. The three homes currently for sale in Sea Cliff are listed from $5,775,000 to $15,000,000. This Tiburon home has the unfortunate backstory that Williams committed suicide there.

With water views from almost every room, this sprawling one-story home built in 1987 looks celebrity worthy. With 6 bedrooms and 6.5 baths, there is plenty of room for family and guests as all bedrooms are en-suite. The sellers’ name was not revealed whether it be Williams’ three children, his wife, Susan Williams or a trust. In the listing information, there is no mention the house belonged to Williams.

Walkthrough the home to the rear and there is the Bay. An expansive waterfront deck with endless Bay views has large dining, lounge areas and a designer pool and spa of course.  The last major remodel was in 2000. The interiors boast floor to ceiling windows and doors, so you never lose the water views or access to the deck.
According to Zillow the “tax assessed value” is at $4,733,013. The annual tax bill is are you ready—$53,317. The home last sold in 1997 for $1,450,000.

Typically homes with a celebrity pedigree bring a premium price. It will be interesting to see what the selling price is. “Having a celebrity’s name associated with a home makes a huge difference, it greatly adds to the “cachet” of a home. I would say it was worth at least 10 percent in terms of value, particularly if that celebrity is well-liked,” explains Nina Hatvany of Compass, San Francisco’s top residential sales agent, 2008-2015 and 2017-19. “One disadvantage, though, like the “Mrs. Doubtfire” house in San Francisco, which might offset the increase in value, is that sometimes homes can be associated with a lot of tourists and visitors. It is more likely to happen, though, if the home was featured in a movie rather than just being the home of a celebrity.” Hatvany adds.

5 Questions To Ask Yourself About Your Retirement Finances
Cyber Thieves Are Going After Retirement Accounts
Oscar nominations: ‘Everything Everywhere All at Once,’ ‘Top Gun: Maverick’ among leaders
Getting your credit score above 800 isn’t easy, but it’s ‘definitely attainable,’ says analyst. Here’s how to do it
Walmart-owned Sam’s Club plans to open about 30 new stores over next five years