A wave of good and bad retail earnings reports in recent days highlights one key theme for the industry: Value is winning.

The results from Macy’s, Kohl’s and J.C Penney were much less merry.

“The off-price and discounters are here to stay,” Retail Metrics founder Ken Perkins told CNBC in an interview. “These are going to be the names that fair well here. I don’t see that changing at all.”

Big-box chains Target and Walmart both hiked their full-year profit outlooks, building on their strong quarterly showings. While Walmart found strength in grocery, Target proved its apparel business is booming. And as more sales shift online, the pair are on solid footing. Both companies logged e-commerce sales growth of more than 30%.

TJX’s same-store sales surged past analysts’ expectations, as more shoppers flocked to its stores including Marshall’s and HomeGoods during the quarter to scour aisles for deals. TJX also raised its full-year outlook, sending its stock to a record intraday high of $61.69.

There used to be much more of a stigma around shopping off-price channels, or hunting for bargains. That was about a decade ago, when department store chains were fairing better. Traffic was healthier at shopping malls. Buying goods at full price was more of a status symbol.

But Retail Metrics’ Perkins says the millennial generation, which includes people born between 1981 and 1996, was somewhat “traumatized” by what their parents faced during the Great Recession, in 2008 and 2009, pivoting their mentalities toward wanting to save money however possible.

“I think the financial crisis washed away the stigma,” Perkins said.

And in turn, Walmart and Target have been investing more money to make their businesses more appealing to younger consumers. Walmart bought Jet.com for $3.3 billion in 2016, in a bid to juice its online business. Target has launched dozens of fresh clothing, beauty and home brands, some of those geared to tweens, tweens and young adults.

Walmart shares are up more than 28% this year. Target shares have surged more than 90%, making it one of the most impressive stories in retail in 2019. Its stock hit a record high of $127.97 this week. 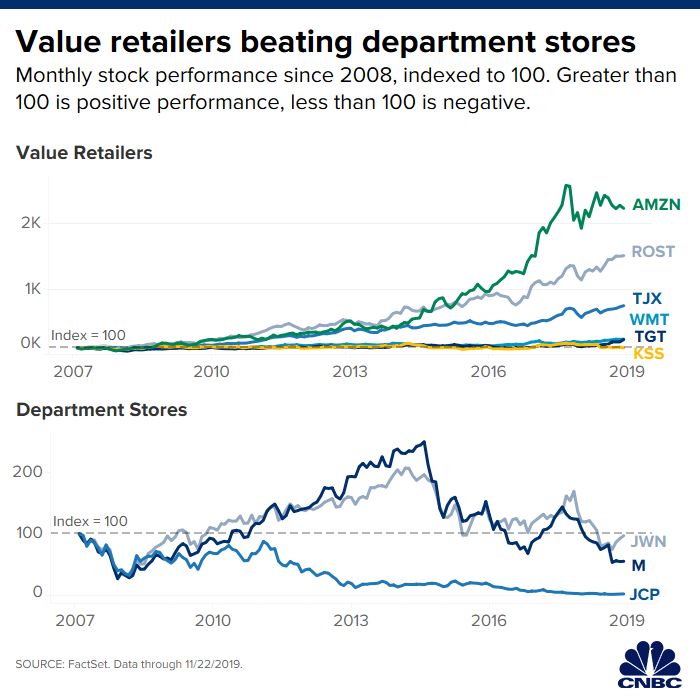 Meanwhile, shares of Macy’s have tumbled near 50% this year, shares of Kohl’s have fallen about 30%, and while J.C. Penney’s stock is up about 5%, it trades close to $1. Earlier, this year, it struggled to stay above that mark, putting it at risk for being delisted.

Nordstrom shares are down about 19% year to date. Keeping with the value trend, when the department store chain reported earnings this week it said its off-price business was up 1.2% during the latest quarter, while full-price sales dropped 4.1%.

Macy’s also has an off-price business, called Backstage, that it is still trying to grow. While its traditional stores are struggling, it’s trying to get in on the momentum in discount retail today.

When Macy’s reported earnings this week, CFO Paula Price said Macy’s “exceeded” its expectations for the Backstage business during the quarter. She said sales at Backstage stores — most of which are located inside of Macy’s stores — open for at least 12 months were up mid-single digits. Macy’s now has more than 200 Backstage locations and said it plans to continue to grow that number.

The same winners and losers are likely going to shake out this holiday season, too.

Mass and discount retailers are the No. 2 most popular holiday shopping destination, according to a survey by The NPD Group. NPD surveyed 3,485 consumers during September 2019.

National chains fall third on the list, followed by department stores. While off-price retailers are eighth, NPD said the number of people who plan to do their holiday shopping at off-price chains is up 3% since 2018, “the most significant increase amid relative stability across most other channels.” Dollar stores fall ninth on NPD’s list of top holiday destinations.

“Bifurcation has been apparent with winners being … Target and Walmart, and underperformers being apparel-driven retailers such as Kohl’s, Macy’s and Gap,” Cowen & Co. analyst Oliver Chen said. “We expect this trend to continue and could be exacerbated in the mall, as lower productivity malls and stores experience outsized pressure.”

“Our sense is that retailers are gearing up for a highly competitive holiday period,” he said.

27 Best Valentine’s Day Gifts For The Home In 2023
Snag The Top Of A Towering 20th-Century Palace In Bilbao, Spain
Biden administration expands EV tax credits in boost for Tesla, Cadillac, others
Here’s where the jobs are for January 2023 — in one chart
Self-made millionaire: Here are 8 things rich people do differently that make them ‘ultra wealthy’