Shares of Nordstrom spiked more than 10% during extended trading Thursday after the company reported fiscal third-quarter earnings that beat analysts’ estimates, and narrowed its 2019 earnings forecast.

Although the stock had recently pulled back somewhat, it was still up about 8%.

That said, Nordstrom has not escaped the broader trend of declining sales for department stores, and its stock is down roughly 26% year to date. Sales fell 2.2% from year-ago levels but were in-line with expectations.

But Nordstrom held firm to its sales forecast, which calls for a 2% decline in fiscal 2019, and narrowed its earnings outlook to a range of between $3.30 and $3.50 per share for the fiscal year. The company previously forecast the lower end of that range to be $3.25 per share.

Here’s how the retailer compared with Wall Street’s expectations, according to Refinitiv consensus estimates:

Total revenue fell to $3.67 billion, from $3.75 billion a year ago, but matched estimates. 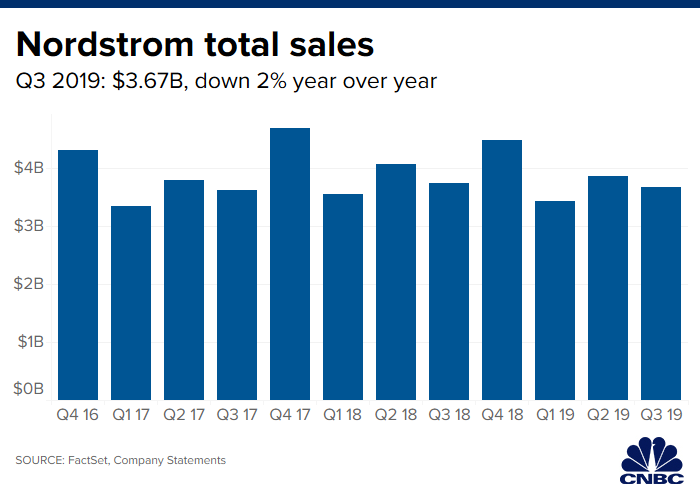 Digital sales increased to 34% of the company total sales from 31% in the same quarter last year. In-store pickup drove roughly half of digital sales in the latest quarter, noted co-president Erik Nordstrom in a conference call with analysts Thursday evening. In the Los Angeles market, in-store pick up made up roughly two-thirds of digital sales, he said.

“We’re barely in the first inning on that one,” he said.

Sales in Nordstrom’s off-price business out-performed its full-price business in the third quarter, rising 1.2% to $1.30 billion from the $1.28 billion in the year-ago quarter. Full-price sales, meanwhile, dropped 4.1% to $2.27 billion, compared to the $2.37 billion in sales last year.

The company opened its first flagship women’s store in New York in October, though sales from the new opening will likely not materialize until the fourth quarter, the company said in August.

The new store received about 85,000 visits during the first weekend, the company said in its earnings release, adding that strong sales in its separate men’s store topped expectations.

In late October, Nordstrom’s board declined a proposal to allow co-presidents Pete and Erik Nordstrom to raise their stake in the company. The company also mentioned that the board had talks with the two over “succession planning.”

Credit Suisse analyst Michael Binetti said in a note last week that the decision “removes some downside support for the stock in the near-term.” The analyst also was concerned about elevated levels of promotions across the market, which can hurt profits.

So far this week, investor sentiment on retail earnings has varied. Shares of Macy’s slid as much as 10% on its mixed third-quarter earnings, while L Brands shares popped more than 7% after the company’s own mixed quarterly earnings.

Correction: This article has been updated to show that, in the quarter ended Nov. 2, Nordstrom’s net income rose to $126 million, or 81 cents per share, from $67 million, or 39 cents a share, a year ago.

With a possible recession looming, here’s how to decide if you should to go back to school
Op-ed: Salesforce appoints ValueAct’s Morfit to its board and a proxy fight may loom ahead
Glacier-Surrounded Hunting Lodge Carries On A 100-Year Tradition In New Zealand
China looks past Covid as tourist bookings surge for the Lunar New Year
Ask Larry: Will Filing Early Lower My Wife’s Social Security Spousal Benefit?