For high-school seniors, the world is their oyster.

In fact, a growing number of college-bound students are completing their bachelor’s degrees in foreign lands.

Rather than just studying abroad for a semester or two, about 50,000 U.S. students are currently pursuing full degrees abroad, with a little more than half of them studying in the U.K. and Canada, according to data from the Institute of International Education.

Benjamin Caldarelli, the co-founder of Princeton College Consulting, said he has helped many students attend college outside the U.S. “You are going to see more and more of this,” he said.

Aside from satisfying wanderlust, there is another notable advantage: cost.

In this country, college costs have been increasing significantly for decades. A college education is now the second-largest expense an individual is likely to make in a lifetime — right after purchasing a home.

Over the last decade, tuition and fees jumped 44% at four-year, private colleges and by 55% at public four-year schools.

Annual tuition and fees for a four-year private college averaged $35,830 in 2018-19; at four-year, in-state public colleges, it was $10,230, according to the College Board. And that’s not even adding in room and board or other expenses.

For many, that means going deep into debt. Seven in 10 seniors graduate with loans, owing about $30,000 per borrower, according to the most recent data from the Institute for College Access & Success.

As a result, student loan balances in the U.S. have reached record proportions, with $1.6 trillion in loans outstanding.

Colleges in France and Switzerland, for example, offer low tuition and, as a result, only a small percentage of students graduate with loans.

More from Personal Finance:
Why college tuition keeps rising
Forget SATs, colleges want to know if you are a good person
Tuition-free college is now a reality in nearly 20 states

In countries like Germany and Sweden, students can attend university entirely free of charge. (College is not less expensive outside of the U.S. across the board, however; at University College of London, for example, U.S. students will pay up to $34,000 in tuition, depending on the specific program. At Oxford, American students may pay an even higher rate, although it also depends on the course of study. The tuition fee for computer science, for example, is $46,000.)

Still, the potential savings is no small thing considering how much the expense of a degree weighs on families, particularly as a college education becomes increasingly important for those aiming to get ahead in today’s economy.

“Is cost causing students and their families to vote with their feet? That question is coming up more and more,” said Robert Franek, The Princeton Review’s editor-in-chief. 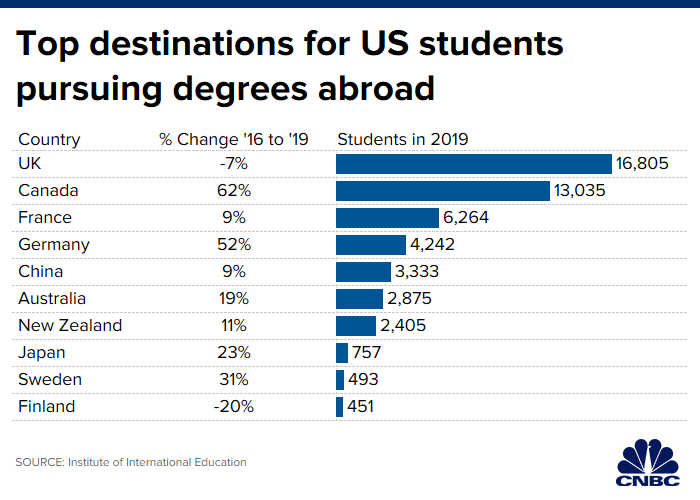 However, determining the value of attending college abroad is not a question of tuition costs alone.

For starters, fluctuating currency rates can make it hard to pin down a precise measure of what the total expense through graduation will be.

“There are a host of international schools that will honor your financial aid – others don’t,” Franek said. (The Department of Education provides information on the number of foreign colleges and universities where Americans can apply for federal aid.)

In many countries, students will need a visa in order to study there, although the requirements vary from one location to another. In some cases, applicants must provide proof that they can cover the cost of tuition as part of that process.

Living abroad is another expense. Families can expect to spend more on travel — both for a college student to come home over breaks and to explore neighboring cities and countries. Although that’s a related expense to studying abroad, any money saved in a 529 college savings plan would not apply.

Even when you add in the cost of traveling overseas, it can be less expensive than a private college in the U.S., and sometimes it can be as prestigious — if not more prestigious.

“Even when you add in the cost of traveling overseas, it can be less expensive than a private college in the U.S., and sometimes it can be as prestigious — if not more prestigious,” he said.

There are other practical considerations, as well. Although many international colleges offer programs in English, not all do. And, even if classes are taught in English, classmates may speak their native language almost exclusively, Caldarelli noted.

Further, most students overseas start school with a set course of study, which means there are fewer opportunities to explore various academic paths – something students in the U.S. might expect.

In Britain, for example, students generally apply to a university knowing what they want to concentrate on, and that may be all they study.

“In the U.S., you go to college and figure out what you want to be when you grow up,” Kantrowitz said.

Ultimately, there are schools in the U.S. that can be just as affordable and worthwhile, said Princeton Review’s Franek. “Just make sure that school is the right fit for you.”

“The calculus for an American student to go to a university abroad will always involve more than cost,” Caldarelli said. “How adventurous are you is the real thing.”

$11 Million Condo In New York Historic NoMad Neighborhood Stays True To Its Glory Days
What is a ‘rolling recession’ and how does it affect consumers? Economic experts explain
Know The Times When An IRA Conversion Is Most Likely To Pay Off
Interior Designer Jennifer Hunter Talks About Traditional Design And Her Career
Top Wall Street analysts like these stocks for maximum returns