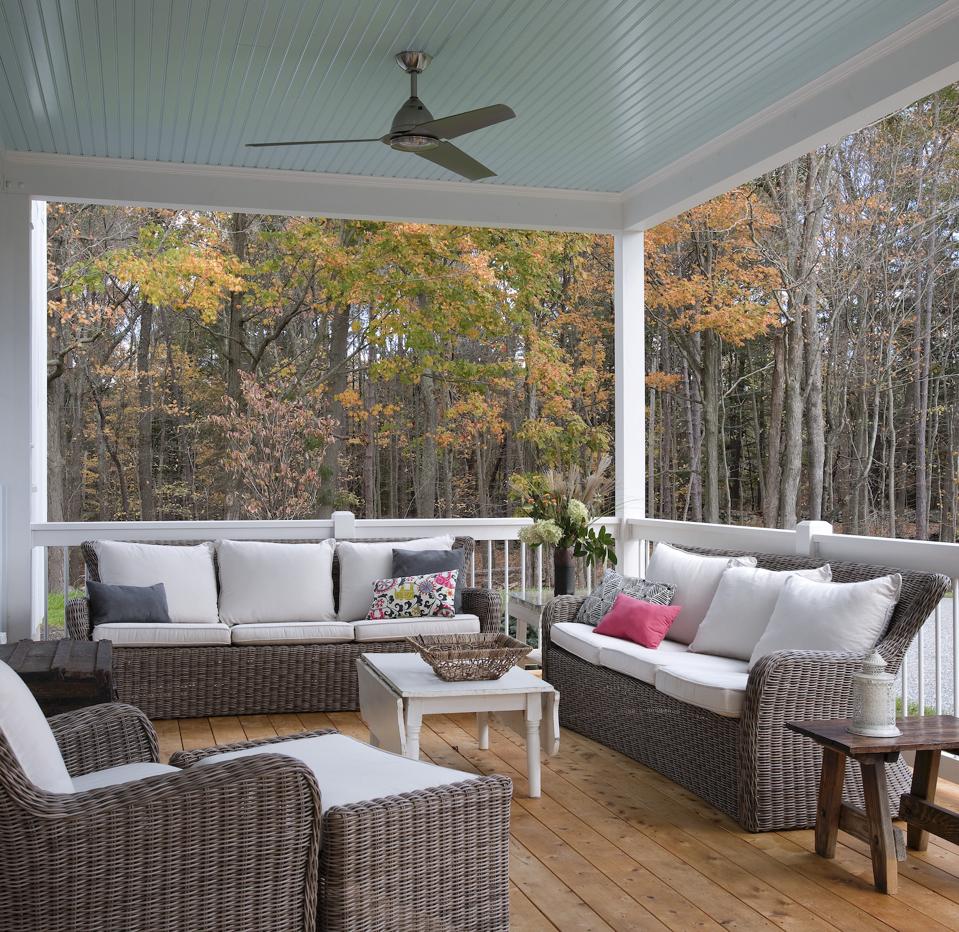 What started out as a Southern tradition, blue porch ceilings have become a trend across the country. “Haint” blue is a pale shade of blue that is traditionally used because of old beliefs. Today, a variety of blue shades are used for porch ceilings, including aqua, periwinkle, and teal.

There are many theories about why porch ceilings are painted blue.

One held theory is that it is traditional. In the south many parents and grandparents painted the ceiling blue, so their offspring do the same. Others believe it extends the daylight hours by having a blue sky on the ceiling of the porch, even as the outside sky is growing dark.

Some of the earlier theories involve evil spirits and the Gullah folklore that ghosts or haints would not cross water, which the blue ceiling resembles. According to the Urbandictionary, haint is a southern colloquialism, defined as ghost, apparition, or lost soul. It was believed that the printed blue ceiling repels those evil spirits. To protect the house these green-blue colors were also used on window frames, shutters, with the paint color determined to be haint blue. As it became a tradition in the Southern, it was kept up there and in other places.

Others believe it tricks wasps and spiders into believing the porch ceiling is sky and so they avoid coming onto it or building nests there.  But a more reasonable and pragmatic theory is the fact that earlier milk paints were mixed with lye, a natural insect repellent. The bugs would naturally avoid the lye and thus the porch ceiling. Some believe that painting the ceiling blue brings good luck.

According to Sue Wadden, director of color marketing at Sherwin-Williams, “Simply put, many homeowners choose to paint the porch ceiling blue because of the way it makes that space look and feel. Blue is a calming color, so using it in an area of the house that’s intended for relaxation makes sense. Throughout the U.S., porches are often a favorite place while the weather is nice to sit and watch time and life go by. When sitting on the porch, it can seem as though life has taken on a slower pace—and the color blue helps with that.

Whatever the reason may be, many people around the United States are painting their porches blue and it adds a bit of whimsy, tradition and color to the porch. Although this was once a Southern tradition, blue roofs are a growing trend across the United States.

The first ETF is 30 years old this week. It launched a revolution in low-cost investing
As hit film ‘Everything Everywhere All At Once’ racks up Oscar nods, here’s what really happens in an IRS audit, according to tax pros
Inclusive Capital takes a stake in Bayer — 3 ways it may build value with a sustainable focus
New York’s student loan forgiveness program covers 24 monthly payments. Here’s what borrowers need to know
When Life Gets In The Way Of Your Retirement Plans