When Kelly Smith had a mammogram in February 2018, she got a clean bill of health.

Yet that April, as she was putting on lotion, she noticed a lump in her left breast. Several follow-up visits to her doctors confirmed the worst: She had stage 3B breast cancer, which had spread to her lymph nodes.

Smith (whose name has been changed to protect her privacy) started treatment the following June, which required her to have a port installed and take a cocktail of drugs. She also had a mastectomy, removal of her lymph nodes and physical therapy.

And if the physical ordeal was not enough, Smith had to tackle another problem: how to keep herself afloat financially.

More from Personal Finance:
How to keep a tax bomb from blowing up your bonus
Spend your retirement savings without triggering a penalty
More than half of U.S. adults say this about retirement accounts

“I was pretty frightened, because this came out of the blue,” said Smith, 54, who is single. “I was worried about my job.”

At the time of her diagnosis, Smith was working in a full-time contract position in project management for nine months.

That complicated her situation. For starters, she wasn’t covered by the Family and Medical Leave Act, which allows workers to take unpaid leave for qualifying medical and family reasons.

As a result, she worked through much of her treatment, including chemotherapy and targeted therapy. It also meant she had to hunt for new employment when her contract ran out. That came as she was still carrying debts from the recession, when she had trouble finding work.

Today, Smith has been declared cancer-free. But she is still recovering from how the disease took a toll on her body and her finances.

With about $40,000 in debt, she is weighing another challenge: filing for bankruptcy. 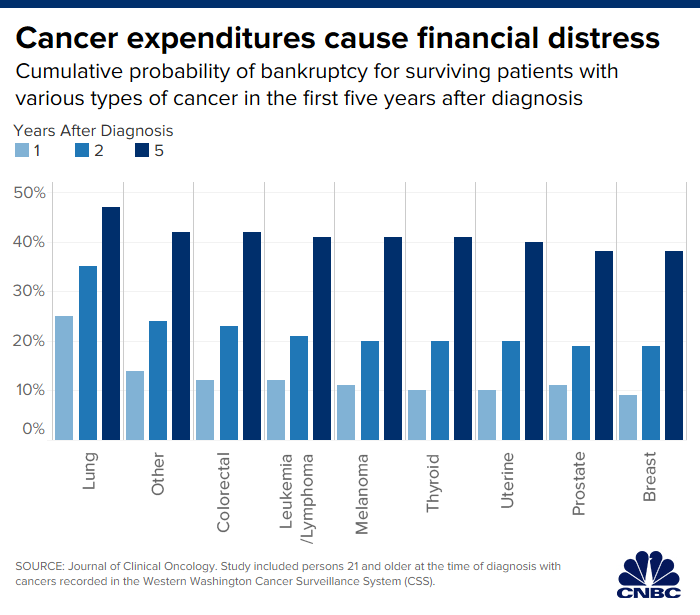 Smith is not alone. Cancer patients are 2.5 times more likely to file for bankruptcy after they are diagnosed, according to the Fred Hutchinson Cancer Research Center, based in Seattle.

Among the financial pain points are the high tab for therapies, out-of-pocket insurance costs and loss of work during and after treatment, said Dr. Veena Shankaran, clinician and co-director of the Hutchinson Institute for Cancer Outcomes Research.

“We want to see meaningful change in how health care is priced,” Shankaran said. “It’s not easy because there isn’t one single solution to this problem.”

There’s even a term – financial toxicity of cancer – to describe the duress individuals with serious cancer diagnoses face, which in turn affects their health outcomes.

Smith, fortunately, had access to something that many other cancer patients do not: the advice of a certified financial planner.

A pro bono program run by the Foundation for Financial Planning is helping to pair patients like Smith with financial advisors at a time when they need it most.

The program has about 180 certified financial planners in 38 states who are volunteers.

That includes Garrett Sloan, a Seattle-based financial consultant and vice president at Charles Schwab, who has provided pro bono advice to Smith and other cancer patients and their families.

They are different than the typical clients Sloan serves, who generally have $500,000 or more in investable assets.

But it’s not an unfamiliar case. Sloan’s own father, who was a doctor, died from skin cancer when Sloan was 13.

That left his mother, who did not know much about managing money, in a tough position. Ultimately, she did get help from a family friend who worked for RBC Dain Rauscher and steered her in the right direction.

Sloan said the patients he meets with are sometimes relieved to be able to share the details of their financial burdens that they may find too embarrassing to tell family or friends.

“They are thankful to have someone to listen to them on this,” Sloan said. “A lot of times they’re so busy dealing with their emotions of a finite life existence and their potential passing that the financial matters of the family sometimes get put on the back burner.”

In working with Smith, Sloan cautioned her to hold off on telling her credit card companies about her situation in case she needed to use the rest of her credit limit. He has also urged her to delay filing for bankruptcy until they can determine how it might affect her future employment, which is something they’re still considering.

Smith also did some of her own leg work to research what was available to her financially. Because she’s not married and does not have children, she was excluded from many social assistance programs.

They’re so busy dealing with their emotions of a finite life existence and their potential passing that the financial matters of the family sometimes get put on the back burner.”

However, Smith did qualify for some modest grants through sources like the Susan G. Komen Foundation and local organizations. She also qualified for a copay assistance program through Genentech, the maker of some of her treatments, which helped reduce her bills by several thousand dollars.

Working with Sloan has helped her to identify priorities as she searches for a new job, including saving a six-month emergency fund that can serve as a cushion.

“I’m hopeful, with time, that I will get things sorted out,” Smith said.

Where to find advice

For the Foundation for Financial Planning, there are challenges in providing a program where so many people need help, Dauphine said. For now, they typically select the patients and families they serve because advertising its existence could leave them overwhelmed with requests.

“I do think as we scale it and build capacity, we’ll be able to have a larger and larger group of patients who can be helped,” Dauphine said.

It’s an important need to fill because many patients are given a medical course of action that does not take into account their financial situation, said Thomas West, founder of Lifecare Affordability Plan, who is also a donor to the Foundation for Financial Planning program.

“They’re looking at prescriptions that are coming from a medical community that really don’t trade in personal finance language at all,” West said. 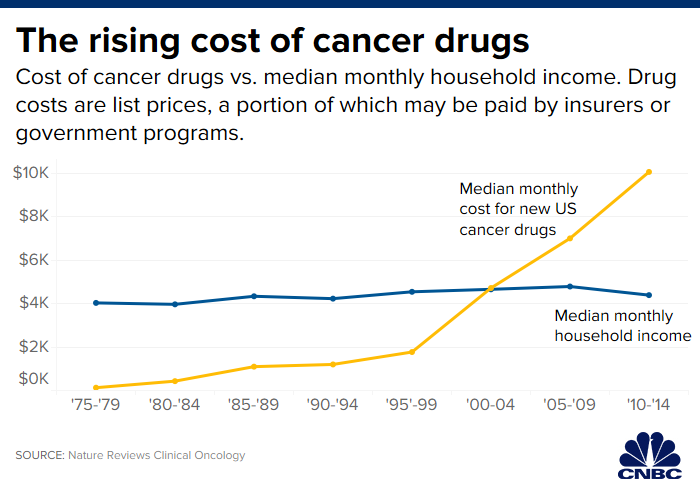 Cancer patients who need advice may look to other sources for help.

Patients and families also might want to consider consulting an hourly financial planner who can help them prioritize, said Carolyn McClanahan, founder and director of financial planning at Life Planning Partners in Jacksonville, Florida, and co-founder of Whealthcare Planning.

Hourly planners typically charge $150 to $200 per hour. While that’s not necessarily cheap, McClanahan said, it does help patients and families set priorities when it comes to areas like cash flow.

If that’s still not affordable, patients can consult with their hospital’s social workers, who can give them guidance.

“The most important thing is the family needs to have open communication about what’s going on financially,” McClanahan said.

Regardless of their prognosis, there are steps that cancer patients can take to get organized financially.

Start before treatment.
Ideally, patients want to get organized before their memory and energy might be compromised by medications. “Once people go on treatment, it’s very hard to get things done,” McClanahan said.

Create a triage list.
Make a to-do list detailing what must happen with regard to taxes, cash flow, insurance and estate planning. Make sure all your assets are titled correctly and have beneficiary designations. Create a list of things you might forget or need a caregiver to access, West said. That includes online passwords, active credit cards, safety deposit boxes and insurance policy numbers.

Consider your disability coverage.
Ideally, patients will have disability insurance. They may also qualify for Social Security disability benefits. Of note, Social Security has a special program, called Compassionate Allowances, that will fast-track individuals for those benefits if they have a diagnosis that qualifies. Also check to see if your life insurance policy includes living benefits, which could help cover loss of income in the event of an illness.

Know the rules before dipping into retirement savings.
If you’re over 59½ years old, you are not subject to restrictions with regard to how much you take out of an individual retirement account or 401(k) to cover expenses. But keep in mind that you will have to pay income taxes on that money, McClanahan said. If you’re under 59½, you will face penalties. There are hardship exclusions for accounts like 401(k) plans, she said.

Save your receipts.
If your medical expenses exceed 10% of your adjusted gross income, you will be able to take deductions for the tax year, West said. So be sure to keep organized records of everything you spend.

Generation X carries the most credit card debt, study shows. Here’s how to get those balances down
Stocks making the biggest moves midday: Chevron, Tesla, Seagate Technology, United Rentals and more
Binance was final destination for millions in funds from Bitzlato, exchange shut down for alleged money laundering
Inflation Adjustments: 3 Tax Numbers All Employees Must Know In 2023
As hit film ‘Everything Everywhere All At Once’ racks up Oscar nods, here’s what really happens in an IRS audit, according to tax pros