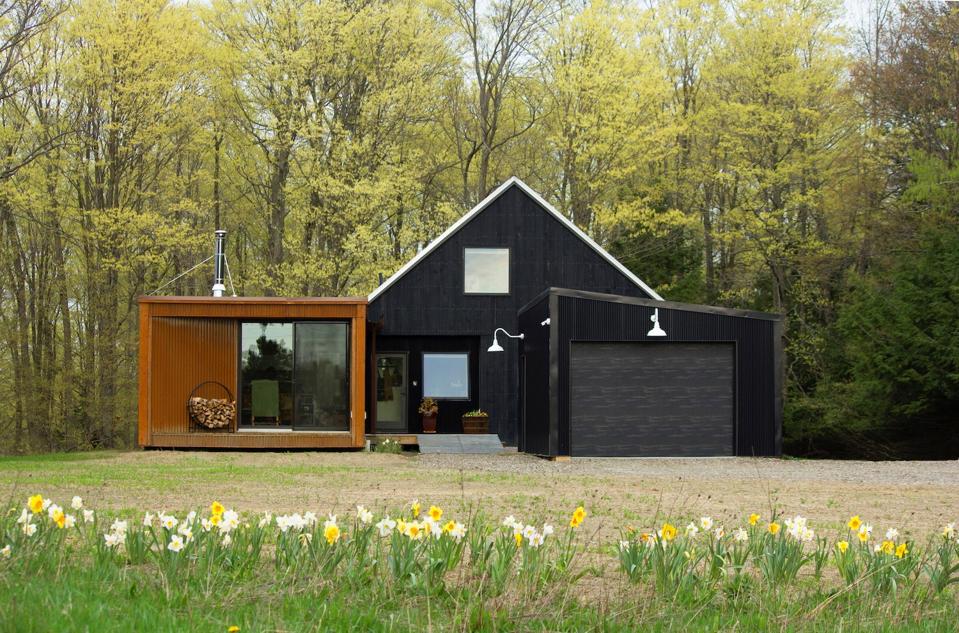 Sheri Koones and her husband lived in a 6,800 square foot house in Greenwich, Conn., but then the kids moved out and their house was just too big. So they downsized. I spoke with Koones (also a Forbes.com contributor) about her new book Downsize: Living large in a small house (The Taunton Press, Oct. 2019) and her experience and those of others who have taken the plunge.

Why did you write this book?

Over the years, I’ve become more and more interested in houses that are energy efficient, sustainable and right-sized. As I’ve been writing and doing research for my columns and books, I’ve seen a trend toward smaller houses and have been interested in how people are able to move from larger houses to smaller ones and still feel very comfortable and happy.

What did you discover about who is downsizing and their reasons for doing so?

There are a multitude of reasons people are downsizing. The boomers are the obvious group, when they become empty nesters. But I also found that young people are downsizing. In addition to wanting less space, many of the boomers were looking for a different type of location than where they had been living. Some of those people who were living in suburban locations wanted to live in a more isolated area or close to the city with shops, restaurants and social opportunities. Some of them had a change in family situations, such as divorce or death. In some situations two adults getting together after owning their own homes wanted a place together. All of them wanted more energy efficient houses so they could save on the cost of heating and cooling and they wanted less maintenance so they had more time to enjoy social activities, hobbies and travel.

Like the boomers, many millennials were downsizing and also seeking a lighter carbon footprint. Having grown up with amenities like water filling stations in school and LEED certified buildings on their college campuses, they were much more environmentally conscious than other groups before them. This younger group of people has grown up with massive school loans, and they have less money to buy a large house. They are also getting married older and having fewer children. This generation is also more interested in outdoor activities such as biking, hiking and traveling than mowing lawns and maintaining a large house. One important takeaway from interviewing all of the people in this book was they were all very happy with the move and no one seemed to miss their much larger former homes.

As a downsizer yourself, what was the hardest thing you had to let go of/give up? Do you miss it?

It was a very difficult task getting rid of years of collected items. But as I began the purge before moving and realizing there would be no space for all of the “stuff,” it became easier to just toss things. I recycled as much as possible and got rid of the items that nobody wanted. I tried to get my children to take the sweet little notes and handiwork they had created when they were small, but they had no interest in this things. So I snapped photos of old notes and drawings and stored them on my computer. Then I tossed the items. I got rid of about 90 percent of everything I owned and feel totally liberated. This is a word used by most of the homeowners I interviewed. Like myself, most of them missed nothing they gave away and are happy to live a less cluttered life.

What types of homes are downsizers looking for? What are ADUs?

There are a variety of types of houses that downsizers moved into. Some built prefab houses, others site-built houses and some renovated older houses to meet their current needs and design aesthetic. I found downsizers living in houseboats and in cottage communities. A growing trend is Accessory Dwelling Units (ADUs), which are separate houses on the same property as the original house. They can be above garages, in basements or separate structures on the property. As housing costs have gone up and space in some has become limited, ADUs are growing in popularity. Whereas a few years ago there were limited municipalities where ADUs could be built, codes have changed and many more states are allowing them, with varying restrictions.

When building your own home, how do you design it so that it works for you rather than you adapting to it?

Everyone needs to consider their own lifestyle and needs when building or remodeling a home. Many people, young and older, today are choosing options to allow them to age in place. And so there are many houses being built today with first floor master bedrooms, barrier-free showers and easier accessibility.

How do you make a smaller house feel larger?

There are many ways to make a small house feel bigger than it is. The houses in this book, all under 2000 square feet, many much smaller, feel quite spacious and comfortable. People used open-floor plans, lighter colors on the walls, limited hallways, well placed windows to provide lots of natural light, higher ceilings, creative storage and so on.

How do you deal with storage?

Planning for storage in the design of the house is vital to making the house functional. Everyone wants a place to keep all the things that have made the cut without having the house look messy. Architects and designers that worked on the houses in this book found creative ways to build in storage with hidden cabinets, niches on the sides of staircases and special racks to hold items that might be difficult to store, such as bicycles.

While downsizing can save money, were there additional expenses that you or those you interviewed didn’t think of?

Most people expressed a tremendous relief in the cost of running their new homes. One of the biggest savings was on energy. All of the homeowners built their homes with varying techniques to save energy. I heard no complaints about additional expenses. Everyone I spoke with was delighted with the downsizing experience.

Are you realizing cost savings from your move; what are they?

I went from a $1000 a month in energy costs to $100. Because we live in a smaller house in town with much smaller grounds we save on landscaping, snow removal and many of the other costs that come with a large home.

What has been the response to the book?

It’d been interesting to see the enthusiastic response to this topic. While I was writing it people were telling me they needed this book immediately. I have been doing talks in various places around this country and the audiences are incredibly enthusiastic about the topic of downsizing and how it can be done comfortably and affordably.

Bill Gates says no country ‘gets an A’ for its Covid pandemic response—including the U.S.
Tourism is roaring back in China. But the $6 trillion consumer market is digging itself out of a deep slump
Bill Gates is ‘very optimistic’ about the future: ‘Better to be born 20 years from now…than any time in the past’
Stocks making the biggest moves midday: Chevron, Tesla, Seagate Technology, United Rentals and more
Comcast beats expectations even as broadband growth slows, Peacock racks up losses