Before and after shot of my student haircut experience.

It can be a hair-raising experience to find a hair stylist that you trust.

And even then you have to find one at a reasonable price that fits your budget. For example, the average cost of a haircut in New York state is now $53.53, according to seller data from Square, the mobile payments company. That’s a cut above the national average for women, which is $45.88.

The more experienced the stylist, the more you shell out. Ouidad, a specialty salon chain that caters to those with curly hair, offers cuts starting at $125.

For some women, just a visit to a salon could land them in hairy situations. In October 2018, Rep. Alexandria Ocasio-Cortez, D-N.Y., made national headlines when she visited a Washington, D.C., hair salon.

She spent $260 on a haircut and highlights. The cut alone cost the congresswoman $80, but that is in line with the average $74.97 in the nation’s capital. Even that amount pales in comparison to the $600 that former Secretary of State Hilary Clinton once spent for a haircut.

Personal experience has taught me that you can get a good or bad outcome, haircut-wise, anywhere. So why not, I thought, take a little risk and get my hair done by a cosmetology student?

More from Personal Finance:
How to decorate your home on a dime
Kick off your adventure trip in these 6 spots
Here’s why you’ve mismanaged your money

Getting your hair-care needs met by students isn’t for the impatient. I arrived at 9:30 a.m. on a Saturday for my appointment — and didn’t leave until 12:45 p.m. You become a living mannequin.

I went to the Aveda Institute in New York City. This is a salon that trains student cosmetologists and estheticians. Their services are offered at a much lower price than you’ll find at regular salons, starting at $28 for a shampoo, haircut and blow dry.

When guests arrive to check in, they are given a release form to sign stating they understand that students are performing the services and the results may vary.

To take the fear factor down a notch, Aveda’s student stylists don’t fly solo. Instructors always begin the cut with the first snip of the scissors, to set up a “base” for the student to follow. Then the teacher will hover, and occasionally stop a student in between snips to show them different forms and techniques. There is also the rare times the students accidentally cut themselves with the scissors, which my student stylist did twice.

I went in asking for a two-inch cut with layers, and it turned out well. However, my hair ended up a little shorter than I expected, because the student had started to cut on an angle and needed to correct later by going even shorter.

As a “test subject” for a student hair stylist, you have to be patient — but also vocal about what you’re looking for. I found the experience a good trade-off, saving me some money while I helped someone practice their craft.

The whole process of a shampoo, cut and blow dry, as well as an added conditioning mask, took three hours and cost $38, plus tip. It was much cheaper than the average salon visit for women — but I still ended up forking over more than the average price for men, which is $32.84 in New York.

It’s not much better elsewhere, either. Nationally, women still pay an average of around 40% more for a haircut than men. Making matters worse, women have to work longer to pay for it, as they earn just 79 cents for every dollar that men make. 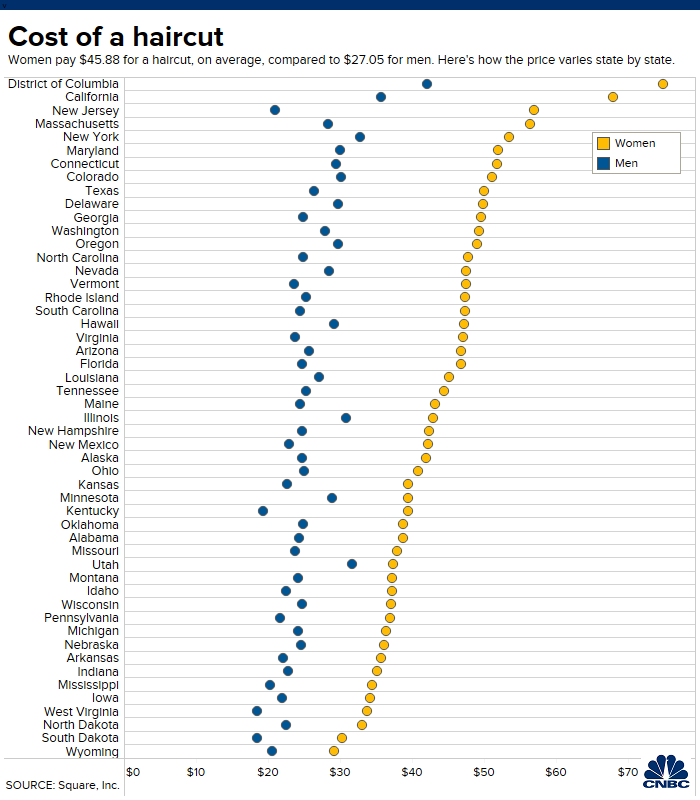 Op-ed: Salesforce appoints ValueAct’s Morfit to its board and a proxy fight may loom ahead
London’s luxury home sellers turn to WhatsApp as private sales surge
How To Shrink High Taxes On Your Required Minimum Distributions
Sam Bankman-Fried Bought This Washington DC Townhouse, Now For Sale At Exactly What He Paid For It
Be Smart: Look For These Financial Exploitation Warning Signs From The DOJ