Here’s something that will stoke your road rage: You’re spending thousands of dollars just getting to work.

Residents in the Washington, D.C., metro area are coughing up $12,015 each year on average just driving to the office, according to an analysis by Clever Real Estate.

The real estate listing website looked at  data from the Census, the Bureau of Labor Statistics, the U.S. Department of Transportation and website GasBuddy.com.

The site studied fuel costs, maintenance expenses and the opportunity cost of workers’ time — since the time spent stalled on the highway is time you could’ve spent working.

See below for a ranking of the 10 places with the costliest commutes. 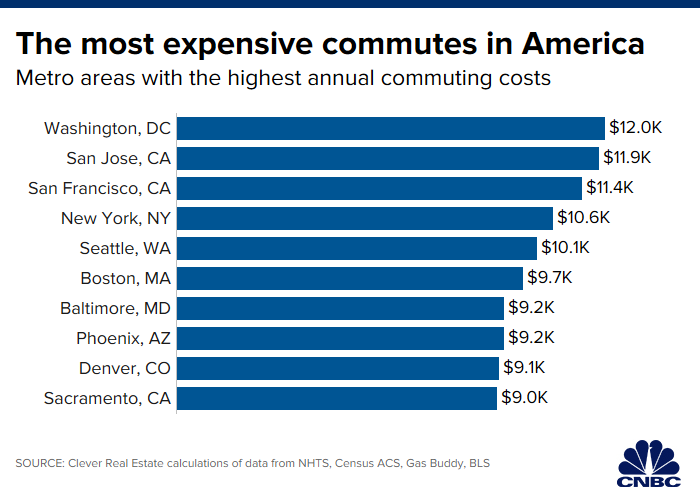 People living near the nation’s capital also spent the most time getting to work: 37.04 minutes on average, Clever found.

“In D.C., that’s probably due more to traffic than distance,” said Francesca Ortegren, research associate at Clever. “There’s a lot of congestion in terms of driving, and they’re spending more time in their vehicle.”

Cities in California rounded out the three metro areas with the highest commuting expenses. San Jose came in second with an average cost of $11,853, and San Francisco came in third with $11,377, Clever found.

Workers in both cities average just over half an hour in commuting times.

Fuel costs raised the cost of getting to work in the Golden State, Ortegren said.

In California, regular gas averages $3.85 a gallon — the highest in the country, according to the American Automobile Association.

While public transit can spare workers the headache of sitting in traffic and ponying up for gas, it can still be costly.

In New York, for instance, a 30-day unlimited ride subway-and-bus pass costs $127. Meanwhile, commuters in Los Angeles can pay up to $122 for a 30-day metro pass.

Regardless of how you get to the office, commuting times should be a major factor in where you choose to live.

More from Personal Finance:
Car shoppers should avoid this risky loan
How to get the best deals on Black Friday
Retirement numbers you should know for 2020

That’s because while it may be less costly to live outside of a major metropolitan area, you might be paying through the nose just to punch in — whether it’s in the form of monthly train passes or time spent behind the wheel.

“There’s a trade-off between commuting and the cost of real estate,” said Ortegren. “Housing becomes more affordable the farther you get from the city center, but commuting costs would offset the savings you otherwise get from cheaper housing.”

“You’re spending a lot of money every day just getting to work,” she said.

‘Do not bet’: China’s central bank warns against yuan speculation
How to turn stock losses into tax savings, and other ways to trim your tax bill
Tim Cook says there are 4 traits he looks for in Apple employees: ‘It’s been a very good formula for us’
Higher-income Medicare beneficiaries may face smaller premium surcharges in 2023. Here are tips for reducing or avoiding those extra amounts
Parents who missed out on the child tax credit of up to $3,600 have until Nov. 15 to claim it using a simple tool