No one is born knowing how to handle money.

Smart money management has to be taught.

Guess whose job that is? That’s right: parents.

Yet teaching their kids about money is something most parents dread.

Instead, they’d rather go to the dentist (39%), talk about sex (36%) or pay a speeding ticket (6%). That’s according to a survey from Country Financial, which asked 1,021 adults in August about their feelings around parenting and personal finance.

Bottom of the list is talking to their kids about money.

More from Invest in You:
Here’s how to get to financial security even after starting late
A better life with tech, but is it worth hundreds a month?
Ever wonder why you’re not rich? A financial therapist can explain

Nearly two-thirds of those surveyed said parents are key in shaping how people first learn to manage money, but parents themselves admit they don’t have the best grip on their own finances. Almost half (46%) gave themselves a grade of C or lower when it comes to financial literacy.

Brad Klontz, author of “Mind Over Money” and co-founder of the Financial Psychology Institute, recommends people identify their money beliefs and take a close look at their family’s money story.

Cultural events can have a huge impact on people’s relationship with money, Klontz says. The Great Depression created a generation of savers, hoarders and even some who mistrusted financial institutions because of the failures of the banking system. 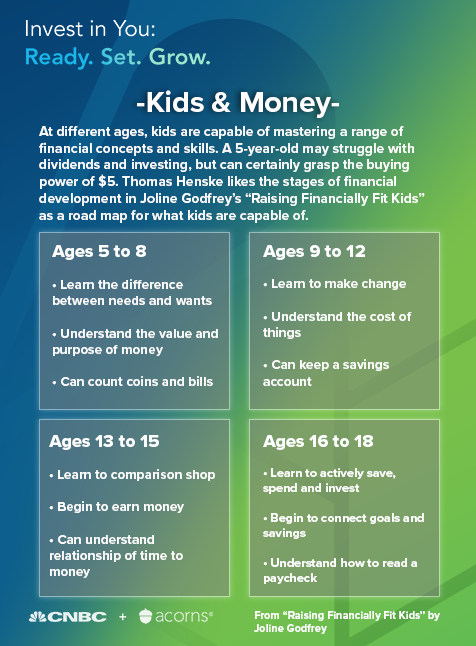 Many parents are generally reluctant to talk about money with their kids, says Thomas Henske, a certified financial planner and partner at Lenox Advisors in New York. They may not want to answer questions like, “Are we rich?”

“That’s such a good conversation starter, ” he said. And it doesn’t have to be directly answered if you don’t want to.

“What do you mean by rich?” he added. “Can you be rich in other ways?”

Henske didn’t feel ready to reveal his net worth to his children when they asked about it at dinner, so he turned the exchange into a conversation about what they thought the figure was — “They gave horrendous answers,” he said — along with the value of their house and their mortgage.

“We’re struggling with the mindset we need to take care of ourselves financially,” Klontz said. “We haven’t really gotten the memo as a culture, and we’re not teaching our kids that this is the new reality.”

“Parents sometimes sacrifice too much for their kids,” said Liz Gendreau, who blogs about family finance on her website, Chief Mom Officer. Gendreau has three sons ages 16, 12 and 4 .

Gendreau believes it’s a mistake to give kids everything, especially if it comes at the cost of saving for a parent’s own retirement. Whether it’s expensive college tuition or a lot of after-school activities, parents should balance their own financial needs with those of their kids.

Everyone has to make decisions about houses, cars, vacations and education, Gendreau says. “Help kids talk about alternative options,” she said. “Sometimes they have no idea what things cost.”

“It may not be something they want to hear, but you have to make choices with your money,” Gendreau said.

People commonly confuse loving with giving. The amount of time you spend with someone is more meaningful. “That is finite, and it’s the ultimate currency,” Henske said.

Young kids need to learn the difference between a need and a want.

“They’re in a store, they want something, you say no, and they get into a hissy,” Henske said.

Instead, teach them strategies and have discussions around how much they want something.

When Henske’s own kids were small, he used to have them put things on their list. He recommends starting this strategy at age 5 or 6.

Older kids can write down what they want in a notebook. Younger kids can, with your help, print out a picture online of the desired object.

Two days later, they may find they no longer want it, Henske says.

3. Not teaching the basics

What’s credit, what’s debt, what’s the difference? “It’s really important to sit down with your kids if they’re still young or even have a conversation with a young adult, and really teach them about the dangers of using credit cards,” Klontz said.

Debit cards work on money that is yours. When you use the card, you’re subtracting money from your own account.

Kids who don’t understand how credit works can face financial disaster when they first sign up for a card, which may be in college, Henske says.

If kids aren’t part of the process when a family buys a car or plans a vacation, they miss out on some important money lessons, Henske says. That means a lost opportunity to teach them the value of a dollar, since they rarely understand how much big things cost.

They might think it would be cool to buy a Maserati, but they have no idea of the dollar amount.

The danger is that, later on, they won’t have all the tools to make informed decisions around what college to go to and what careers they might like. “They don’t understand the income and lifestyle that a specific income affords you,” Henske said.

Vacation planning is perhaps more fun than talking about car alternatives and dealer negotiations. “Talk about the airfare, whether you’ll drive or fly, how much are meals,” Henske said.

This is a conversation that can go on for days, and kids can help with ideas for meals and recreation.

High school students might pay for their own car insurance. If someone wants an expensive iPhone, they might pay for the data service portion of the bill. “It doesn’t have to be an unworkable amount,” Henske said.

When his son wanted to go to a private school, Henske came up with a dollar amount that he could contribute. “It’s not huge, but he has to go out and referee games, work at an ice cream place,” Henske said. “It shows me he really wants to go.”

6. Treating money as a taboo

“We still treat personal finance and money as a kind of taboo,” Gendreau said.

She’s not recommending deep financial conversations with preschoolers, but by the time kids are in their teens, parents can talk about college costs or buying a car.

“They benefit from learning how to budget,” Gendreau said. “The more you can educate your kids through real-life examples, even things you wish you’d done differently, the better.”