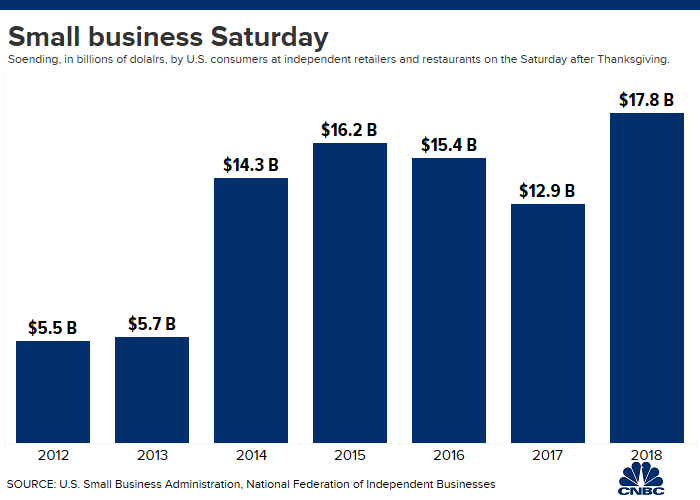 Independent retailers are gearing up for Small Business Saturday, a day used to promote mom-and-pop retailers, and many towns are doing their best to support the effort.

In 2018, an estimated 104 million consumers shopped at independent retailers and restaurants on the Saturday after Thanksgiving. They spent $17.8 billion, the most since the shopping event was created by American Express in 2010 to help drum up business in the wake of the Great Recession.

Kathi Petrocelli opened The Olive Tap in 2006, right before that economic downturn started. The shop, which sells olive oil, balsamic vinegars and gourmet foods, is one of 49 small businesses in downtown Long Grove, Illinois. On Small Business Saturday, the store will usually see a few hundred customers more than it would on a regular holiday season day, she said.

Woman shopping through The Olive Tap in Long Grove, Illinois.

The town works with the American Express Small Business Saturday campaign to promote the event, and individual retailers like The Olive Tap promote it on their social media accounts and flyers.

“Our village prides itself on the small-town feel and personal attention to shoppers with unique and beautiful items,” said Laurie Wilhoit, marketing communications manager for the Historic Downtown Long Grove Business Association.

Between 500 and 700 people participate in the event, according to Wilhoit.

“Our communities are really supportive,” said Mathilde Wiest-Puchala, an employee at Morkes Chocolates. “We don’t see that many people on an average week. In the summer, it’s busier but in this area it gets pretty cold, so people are more prone to shop online.”

In Summit, New Jersey, around 200 businesses participate in the event, which is one of the busiest shopping days for the town, said Meredith Hendra, a spokeswoman for the city.

The town goes all out for the hectic day. One promotion is the Shop Summit Passport event, which helps to encourage shoppers to explore the town’s hundreds of businesses. Shoppers can get a “passport” stamped at any of the downtown businesses. Once they collect eight stamps — four of which have to be retailers — they can enter to win a $500 Summit Visa gift card. The day is also filled with entertainment and carriage rides.

“Small Business Saturday is a great way to promote shopping small and shopping local in downtowns and the businesses and the downtown benefit from that message going out on a national level,” said Hendra.

Christie’s launches ‘Department X’ as collectible sneakers and street-wear boom
IRS erred on child tax credit payments for millions of eligible families — but aid was 98% accurate overall, report finds
The IMF’s Monumental Malpractice
Despite success this year, underperformance rates are ‘abysmal’ for large-cap active managers for the long run
In a reversal, the Education Department is now excluding some borrowers from student loan relief