T-Mobile US CEO John Legere testifies before a House Committee on Energy and Commerce Subcommittee hearing in Washington, February 13, 2019.

For about the last two decades, the cable industry has been fueled by three revenue streams: cable television, landline phones and high-speed broadband.

Recently, though, cable’s prized triple play has started to erode. Fewer households need a landline. Millions of Americans are canceling cable TV, a trend poised to accelerate as new streaming products such as Disney+, Apple TV+ and HBO Max hit the market. Add it all up and cable companies are left with only one reliable product — high-speed Internet.

Investors don’t appear concerned. Cable internet has high profit margins and growth has been so strong that the two largest U.S. cable companies, Comcast and Charter, are both trading near record highs even as their business is fragmenting. Comcast added 379,000 residential high-speed broadband customers last quarter, its strongest third quarter in a decade. 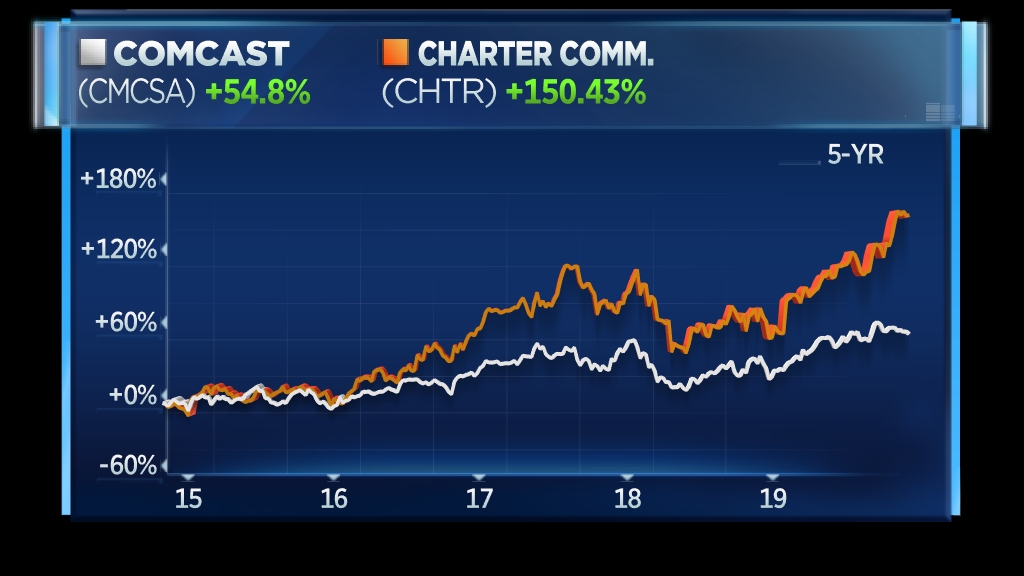 Still, there’s a potential existential threat on the horizon: home broadband from wireless carriers Verizon, AT&T and T-Mobile/Sprint, who are all touting the power of 5G. Those companies are offering lower-priced plans that could save Americans billions of dollars and leave cable providers with nothing.

“The cableopoly is scared!” Legere wrote in a T-Mobile blog in February. “They’re scared about 5G, and the New T-Mobile, and finally having to compete.”

But talk to cable executives and you’ll find that, like their shareholders, they’re decidedly not scared. While 5G is generating a ton of buzz for its ability to supposedly handle the massive amounts of data coming from artificial intelligence workloads and self-driving cars, the technology has limitations when it comes to replacing cable infrastructure.

“As cable operators, we agree 5G technology works, but we don’t believe it’s a real threat to our business,” said Dexter Goei, CEO of cable provider Altice USA, in an interview.

There are two different 5G-based plans intended to compete with cable for home broadband. One is being championed by Verizon and AT&T and the other by T-Mobile, assuming it’s allowed to merge with Sprint.

The important difference between the plans is Verizon and AT&T will sell a separate fixed home broadband service that the companies will likely bundle with their 5G wireless product. T-Mobile’s 5G plan is to promote its wireless service as a home broadband replacement, using the same network of previous unused lowband and midband spectrum.

Verizon has already launched its 5G home broadband product in limited areas of Chicago, Los Angeles, Houston, Indianapolis and Sacramento, California, for $50 a month. The service provides speeds between 300 and 840 megabits per second. By comparison, Cox, the third-largest U.S. cable provider, sells its residential 300 Mbps product for $79.99 per month.

To get such high speeds, Verizon is using millimeter wave technology that connects with fiber close to the home. While Verizon has some fiber already in the ground, the largest U.S. wireless carrier will have to spend billions of dollars in the coming decade to lay more fiber to offer a competitive 5G home broadband product throughout the country — an endeavor that will be both expensive and time consuming. But Verizon has a market capitalization of $250 billion, giving it plenty of borrowing capacity and a potentially long leash from shareholders.

A $50-per-month home broadband product will be a competitive service in urban areas, because Verizon will be able to hit many potential consumers once it lays down fiber, said Vinay Kanitkar, chief technology officer of global carrier strategy at Akamai. He said that Verizon’s offering makes sense in densely populated cities but less so in suburbs and rural areas because millimiter wave technology is not effective at going through thick walls or trees.

“In the big cities — New York, Boston, San Francisco — I think 5G broadband will be a threat in a couple of years,” said Kanitkar. “It will be cost effective once Verizon lays fiber.”

But Goei says Verizon and AT&T have a long slog ahead if they want to create a nationwide network that would mimic their mobile footprint.

“It would take a decade for a wireless carrier like Verizon to build fiber throughout the country if it had unlimited money,” Goei said. “And it doesn’t have unlimited money.”

For Altice, the process of getting up and running in the New York region is indicative of the bureaucratic and political challenges that carriers face that go beyond just the technical limitations. Here’s how Goei describes the struggle:

“We are building fiber to home in the New York tri-state area now, in a region where we already have permits and local relationships. From when we announced we were doing that in 2017, it has taken us two years to get up and running before we could connect a single home. That’s purely the permitting process in our backyard. But we were haggling with these communities one by one to lay more fiber. If it takes us two years to get up and running, imagine trying to hit the 50 top markets in the U.S. coming in without the relationships. It’s impossible.”

T-Mobile hopes its new 5G mobile network can translate into a home broadband replacement product on its own. Legere has promised that if T-Mobile is allowed to merge with Sprint, the combined company will offer average speeds with lowband and midband wireless spectrum of more than 100 Mbps to 66% of American households by 2021 and 90% of Americans by 2024. If it works, Legere estimates the new T-Mobile will save American consumers up to $13 billion a year on home broadband, as one network could be sold for both mobile and in-home use.

Legere notes that almost half of American households have no competitive choice for high-speed in-home broadband with speeds of 100 Mbps. In rural areas, more than 75% have no high-speed broadband service or only one option available.

Executives from Comcast, Charter, Altice and Cox — the four largest U.S. cable providers — unanimously see Verizon and AT&T’s plan as a more serious long-term threat than T-Mobile’s, according to people familiar with the matter who asked not to be named because they’re not approved to speak on behalf of the companies.

Legere’s proposal has technical obstacles, said Kevin Hart, Cox’s chief product and technology officer. A wireless network alone won’t be able to handle the bandwidth demands that come from the use of dozens of connected devices and games like “Fortnite,” he said.

“Only a wireline network is going to be able to handle the massive capacity that comes with home broadband,” said Hart. “We view a purely wireless network as complimentary to cable, not as a replacement.”

A T-Mobile spokesperson said the company’s 5G network will have “the massive capacity gains and dramatic increases in speed to bring real competition and real choice for in-home broadband to Americans who have been at the mercy of the cable companies for too long.”

T-Mobile’s plan isn’t without precedent. European carriers have successfully deployed the same midband/lowband strategy to roll out 5G. But those companies also own a suite of deep fiber because cable and wireless companies have merged in Europe. That type of combination hasn’t happened in the U.S. but it could, said Goei, particularly with a company like T-Mobile, which needs cable expertise.

“In the European context, you’re not seeing a wireless vs. fixed competition because the companies are the same,” said Goei. In the U.S., “you can have all the spectrum in the world but you’re going to need the help and cooperation of cable companies to roll out the small cells, because it’s the cable companies that have the neighborhood relationships.”

John Chapman, chief technical officer of Cisco’s cable business, said Legere’s claim that T-Mobile will be a true replacement for cable is just “rhetoric.” Instead, it’s more likely that cable companies will continue to push into the mobile market through existing mobile virtual network operator (MVNO) agreements, which allow the operators to offer wireless service to customers and offload some of the data to cable WiFi. Comcast, for example, has about 1.8 million wireless customers today.

“The cable guys have landed with a pretty good answer right now because they’re becoming mobile companies,” Chapman said. “We see partnerships between the mobile and cable companies continuing, whether they become part of the same company or not. The cable companies aren’t scared from a competitive point of view.”

Even if Verizon, AT&T and T-Mobile are able to build out 5G networks in meaningful territories, cable’s response may be to once again offer even higher speeds and more capacity. The industry has launched a “10G” initiative, though the G stands for gigabit instead of generation. While the four largest U.S. cable companies offer 1 gigabit of speed throughout most of the U.S. today, the industry is planning on ramping that up to 10 gigabits in the coming years, with field trials beginning in 2020.

Today, the difference between 1 gigabit and 10 gigabits isn’t particularly significant because either can easily handle normal web activity and video streaming. But as home health care and virtual reality gaming gain popularity, higher speeds will become more important, and cable companies have the advantage because they’re connected to the home.

“The use cases that are on the horizon will definitely need a multi-Gig network with low latency and high security,” Cox’s Hart said. “That’s why I think cable is well positioned, because we’re already doing it.”

The bottom line, according to Craig Moffett, a telecommunications analyst at MoffettNathanson, is 5G simply won’t be a panacea for those looking to ditch their reliance on cable.

“For now, it looks like 5G won’t pose much of a threat to wired broadband,” said Moffett. “Coverage is too limited to make the economics work when using high frequency spectrum, and capacity is too precious when using midband spectrum. That will change over time, perhaps, but the early fears that 5G would pose a direct competitive threat have abated dramatically as investors have come to understand 5G’s limitations.”

(Disclosure: Comcast is the owner of NBCUniversal, parent company of CNBC and CNBC.com.)

WATCH: US falling behind China on deployment of 5G, analyst says