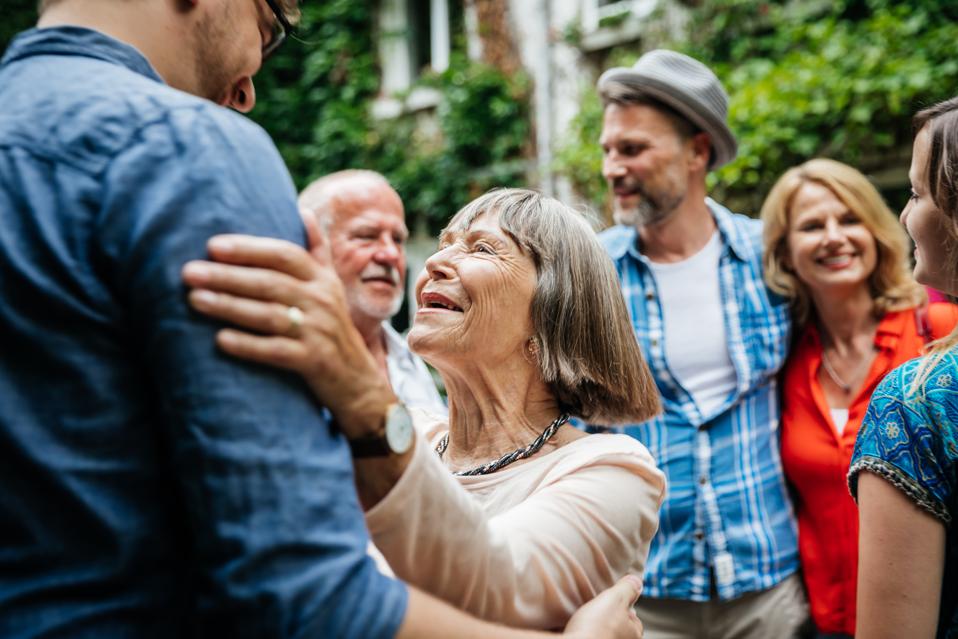 Social capital is the practice of developing and maintaining positive, healthy relationships. Those relationships make up the social networks of people willing to help each other when necessary.

Capital generally refers to assets, and social capital refers to the resources that are available to people because of their networks. Sociologists go much further in their definition and application of this whole idea, but for our purposes, this definition is sufficient, and since we are in the midst of holiday season, it seems timely to raise the issue of our connectedness to the family and friends who comprise our social networks today.

As you decided where and how to spend your Thanksgiving Day, you may have had to choose among several invitations.  Should you travel across country to be with your children and their families? Should you host a dinner for friends at your home? Should you join your 96-year old mother at her retirement community or try to relocate her to your house for the day? Without realizing it, you were evaluating how best to nurture and maintain your social capital. Those who had nowhere to go last week very likely had little or no social capital to draw upon.

Just like monetary resources, as we get older, that social capital becomes more and more difficult to build. Hence the recent concern about loneliness and isolation among older adults. Why is it happening? There isn’t a single reason for it, but rather a combination of forces that is creating the decline.

·     The percentage of baby boomer women who chose not to bear children reached an all-time high of 19.4% the baby boomers. This is almost double what it was for all previous generations. Therefore, these childless adults are less likely to have someone to care for them as they age.

·     Divorce rates among those over 50 climbed to their highest rate ever: for every 1000 married persons in 2015, ten were divorced by the end of the year.

The Health and Retirement Study(HRS), a set of surveys of adults ages 50 and older in the U.S., examined trends in social capital over a 20-year period (1994-2014) for adults ages 61-63. When those results were compiled, they spotlighted some important changes.

·     The percentage of those who were married or cohabitating dropped from 75% to 68% during that 20-year span.

·     Those who reported having good friends in the neighborhood dropped from 69% to 58% in that time period.

·     Those reporting they attended church (or other religious community) at least three times per month dropped from 56% to 41%.

The reason these statistics are alarming is that with greater longevity comes greater need for care in later years. Where will that care come from? Most of the oldest old in today’s society rely partly or fully on informal caregivers––family and friends. As the potential for informal caregiving declines, more older adults will need paid professional care. Many will end up relying on government aid, also in short supply. The future being painted by these statistics is not a pretty picture.

I spend a lot of my time and energy writing and speaking about Solo Aging, a topic near to my heart because Iam a Solo Ager. Like almost 20% of baby boomers, my husband and I never had children. To say having children creates instant social capital would be a stretch, but it is true in large measure. Look around you. Who do you see taking care of the oldest old in your community? It is probably their adult children. Everyone needs social capital, but solo agers are starting from a deficit and need to start earlier and work harder to build and maintain that capital.

How do you build social capital? Start with these ideas:

·     Become a joiner. It doesn’t matter what group or organization you join, as long as you participate actively and regularly. Social capital will follow

·     Befriend your neighbors. If you plan on aging in place for as long as possible, you really need to know the people who live around you. No matter how long you have lived there, it’s not too late to start. Organize a block party, invite them in for some refreshments over the holidays, say hello when you are outside, join NextDoor.com.

·     Entertain more. When you invite people over for a meal, a card game, or few drinks, etc. you will be starting a reciprocal relationship. Unless you discover you have nothing in common, they will probably return the invitation in the future.

·     Move to a tighter knit community. A condominium, apartment, or mobile home park are all much more conducive to community building than is a single-family home in the suburbs.

·     Move to a retirement community.

I’d love to hear your thoughts on this. Connect with me on LinkedIn or through my website, SaraZeffGeber.com.

Alphabet misses on earnings and revenue as YouTube falls short
Inside The California Mansion Where Harry And Meghan Filmed Their Netflix Documentary
Portugal’s Top Residency Visa Options—And Who They’re Best Suited To
Travel companies are ‘greenwashing’ — here are 3 ways to find ones that aren’t
Ask Larry: Will Rolling My Pension Into An IRA Avoid Social Security’s WEP Reductions?