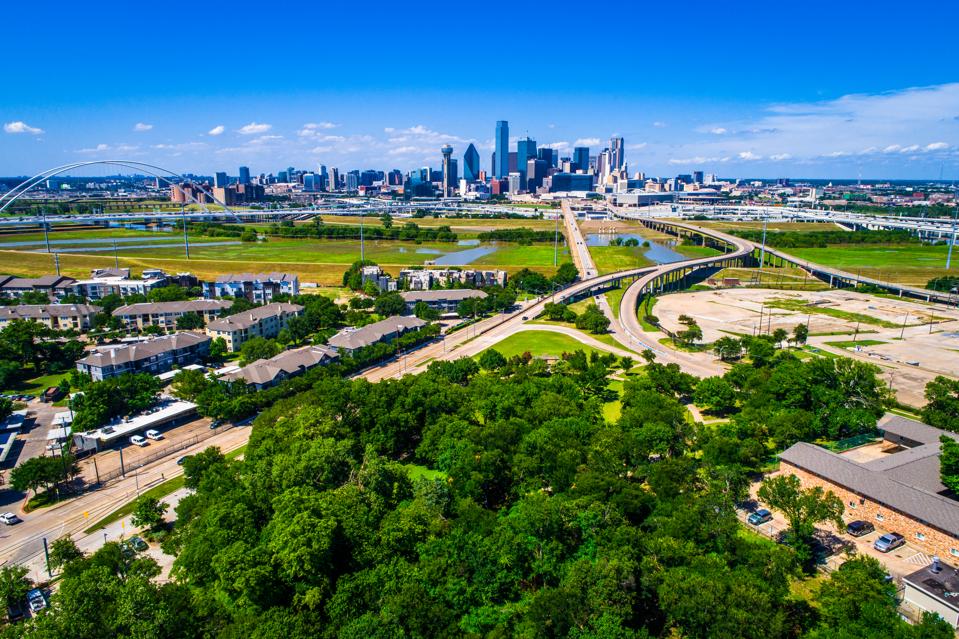 Reforestation is underway in Dallas parks with the replanting of trees lost from severe weather earlier this year. An unprecedented 700 trees were lost in parks alone. The devastation to the city’s mature trees is estimated to amount to 15,600 caliper inches of trunk diameter, as reported by the Dallas Morning News. To scale such replacement would equate to 5,200 new trees, according to city parks officials. Of course, there is irrigation and maintenance to factor, too.

The Branching Out initiative of the Texas Trees Foundation (Texas Trees), in conjunction with its partners and the City of Dallas Parks and Recreation Department, is helping to restore the tree canopy in neighborhood parks. For one partner in commercial real estate, there’s a tree legacy to proudly uphold.

Crow Holdings, the Dallas-based real estate investment and development firm, follows in the footsteps of their founder Trammell Crow, when they team up with nonprofits Texas Trees and the Arbor Day Foundation to plant upwards of 50 trees in one day this month at Kidd Springs Park.

The late Trammell Crow’s influence in, and reach across, the commercial real estate industry would be hard to overstate. Described in a feature by Forbes in its April 15, 1971 edition as “the U.S.’ biggest private real estate developer,” Crow at that time, with his Trammell Crow Co., held interests in properties worth in excess of $1 billion.

Throughout his career, Crow built more than 100 million square feet of buildings, and was one of the first U.S. developers to go international. Many, though, remember Crow for the inspiration he gave to them as a lasting legacy, more so than the impressive fortunes made and the buildings built.

Crow knew what the best business leaders learn: there’s far more to business than just business. Though he is rightly recognized as someone who helped to shape Dallas’ built environment, one cause very close to Crow was the natural environment. Crow championed trees. His motto was, “Trees are the answer.”

In 1982, Crow co-founded the Dallas Parks Foundation, which was the original predecessor to Texas Trees. Crow also established and served as chairman of the National Tree Trust, a foundation to support local tree planting across the country by raising public awareness, mobilizing volunteers and bringing together corporations and civic institutions for action. He was an early supporter of the Arbor Day Foundation, the organization which, in 2006, consolidated the Trust’s programs and stewardship.

It’s no surprise then that Crow Holdings prioritizes an entire day in the field supporting reforestation, and exercising corporate social responsibility, where upwards of 150 employees will roll up their sleeves.

“We are delighted to partner with the Arbor Day Foundation and Texas Trees Foundation,” said COO of Crow Holdings Gillian Sutton Cho, “to help improve our community and carry forward a longstanding company commitment to sustainability.”

Crow Holdings considers real estate development and investment properties as integral parts of the communities that surround them. The primary investment objective of Crow Holdings Capital is to maximize investor returns on a risk-adjusted basis. Their goal is to responsibly consider various ESG issues — environmental, social and governance, related to the firm, the property and the community. Properties are evaluated for ESG at acquisition, get benchmarked and are monitored thereafter by external advisory.

In a Dallas park in December, Crow Holdings and its team members will demonstrate their founding principles, plus a lot of strength for the community.